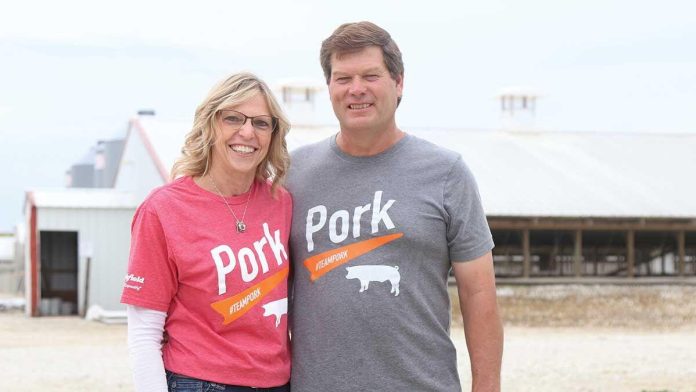 Jerry and Nancy Croghan grew up around pigs, so it should come as no surprise that the couple remains a part of the pork industry.

The couple was honored earlier this year as Master Pork Producers by the Iowa Pork Producers Association. They grow 200 acres of corn and soybeans on their Shelby County, Iowa, farm and also have a 4,400-head wean to finish facility, raising pigs for Smithfield Foods.

“We had a few hogs before that, but our facility was getting old,” Jerry says. “We decided to update and starting working with Murphy Family Farms in 1999 and then moved along with Smithfield when they purchased Murphy.”

The operation is all in/all out, giving Jerry and his crew time to perform maintenance and clean the structure.

“I do a lot of the work myself, but I do hire someone to do the power washing,” he says.

A total of 8,800 pigs are marketed annually out of the couple’s western Iowa facility.

Jerry is a longtime member of Smithfield’s Regional Advisory Council for the Midwest, expressing ideas, concerns and questions to management. In 2016, the Croghans participated in Smithfield’s Raised Without Antibiotics program, exceeding production expectations by implementing a rigorous biosecurity plan.

Manure from the facility is used on the couple’s crop ground. Jerry’s cousin also used the manure.

“We apply on his ground, and he does spraying and other things for us,” he says. “I haven’t purchased commercial fertilizer for 20 years.”

They are also active in their church and community. After their oldest daughter was diagnosed with non-Hodgkin’s lymphoma, they got involved with the Family Cancer Network. The nonprofit organization assists with travel, rent, groceries, and more for patients battling blood and pediatric cancers.

They have five grown children and 10 grandchildren, and their 11th grandchild is due at the end of October.

Jerry says he is hopeful the farm will continue in the family.

“That’s something we want to do, to transition the entire farming operation on to the next generation,” he says. “That’s very important to us, to see this continue.”