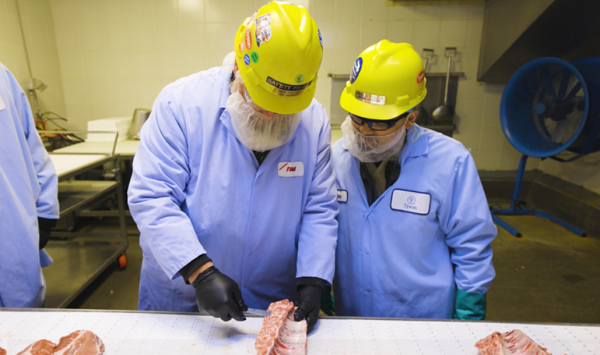 In 1982, Iowa Beef Processors, Inc., a forerunner to Tyson, purchased the then-vacant plant from Hygrade Food Products and remodeled it extensively. It was IBP’s first venture into pork production.

Hygrade, which had once been Storm Lake’s largest employer, made clear the pork plant wasn’t doing well as early as 1978, and made plans to close due to a dwindling local hog supply, increased operating costs and labor difficulties. It remained open for a time, but by October 1981, with the plant losing money, Hygrade closed it down. Roughly 500 jobs were lost.

Storm Lake civic leaders cheered IBP’s $2.5 million purchase of the plant in April of the following year. When an IBP airplane landed at Storm Lake’s airport on the day of the announcement, they were met by an entourage of eight cars, plus a police escort. Cheerleaders and a band played for the IBP delegation.

Hiring began in early September 1982, according to Journal archival information, with a base hourly rate of between $6 and $7. Then-Iowa Gov. Robert Ray and U.S. Rep. Berkley Bedell were on hand for the occasion when the plant resumed operations that month under new ownership.

“There is a real positive attitude here. It’s good to have the enthusiasm and support of the community,” Bruce Pautsch, an IBP spokesman said in 1982 when hiring began at the Storm Lake plant.

IBP initially hired 350 employees for one daily production shift at the plant, a Tyson spokeswoman said. Today, the plant employs around 2,300 and runs two production shifts and one maintenance and sanitation shift.

The plant has been expanded significantly from what IBP acquired 40 years ago — it’s now more than 300,000 square feet. The sprawling facility was built in numerous phases: certain parts of the property date back to the early 1930s, while other parts were built at various points between the 1940s and the 1990s. More recent additions were in 2016 and 2019, according to Buena Vista County property records.

Tyson would not disclose the amount of pork produced at the plant, but a spokeswoman said it processes more than three times what it did in 1982. The plant produces fresh boxed pork products for retail and foodservice, raw pork materials sent to case-ready plants (which take larger cuts of meat and prepare them into cuts for retail), and pork for export.

When IBP opened the plant in 1982, company officials expected 7,000 hogs to be processed in an eight-hour shift.

IBP was acquired by Tyson in 2001 for $3.2 billion. (Tyson also operates a turkey complex in Storm Lake, one of the largest turkey plants in the country, which was acquired upon Tyson’s purchase of Hillshire Brands for more than $8.5 billion in 2014. Tyson’s turkey operations in Storm Lake employ around 750 people).

Mary Berg was 22 years old when she began a job with an IBP construction crew working on the remodeling of the pork plant. When the plant began production later that year, she became a gam-cutter on the harvest floor.

“I came from Early, Iowa, and I was living in Sac City at the time. I was without a job and one of my best friends’ dads said, ‘You’d better get up there if you want a job,'” said Berg, now 62 and a training specialist at the plant. “I went up right away and was hired right away.”

Berg is one of 10 current employees who’ve been working at the plant all 40 years Tyson has operated it. The others are Richard Zwemke, Ivan Scwhaller, John Wiley, Jerry Morlan, Ron Peters, Mark Thompson, Keith Benningsdorf, Dan Coleman and Nick Lovan.

“When you’re working in a place like that, you become family. You work with everybody, that many hours a day, that many days a week, they become your second family,” Berg said.