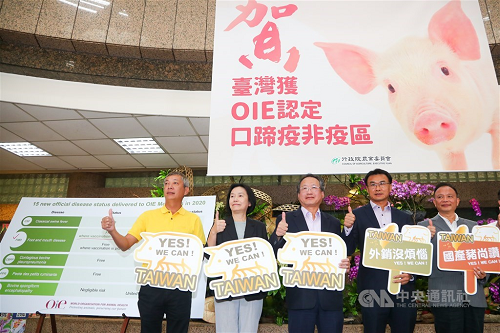 The annual output value of Taiwan’s fresh pork exports could exceed NT$10 billion (US$334.1 million), with the main markets likely to be Japan and southeast Asian countries, officials said Wednesday, the day the country received a designation that will allow such exports to resume after a 24-year hiatus.

Taiwan and the offshore counties of Penghu and Lianchiang (Matsu islands) were officially named a foot-and-mouth disease (FMD) free zone where vaccination is not practiced on Wednesday, meaning Taiwan can start exporting fresh pork again.

The World Organisation for Animal Health (OIE) announced the designation on its website Wednesday, but the news was already revealed by the Taiwan government late Tuesday.

For the past 24 years, Taiwan has been banned from such exports after a FMD outbreak in 1997.

Currently, 5.51 million swine are raised in Taiwan, and Huang expects that to increase by 1 million for export purposes. As such, the annual output value of exports could exceed NT$10 billion, he said.

Also at the press conference, COA Minister Chen Chi-chung (陳吉仲) said that although Kinmen remains a FMD-free zone where vaccination is practiced, the council will try to end the inoculation program there within three years.

The bureau has already asked employees at overseas offices to review each country’s regulations governing pork imports and to conduct market analysis, to aid in the formulation of marketing strategies, Chen said.

However, Liao Chin-fu (廖錦富), head of a farmer’s association in a Yunlin County township, said it will be an uphill battle for Taiwan to reenter the Japanese market.

Before the FMD outbreak in 1997, Taiwan exported NT$60 billion worth of fresh pork to Japan annually, according to COA data.

In the years since, Taiwan has been replaced in the Japanese market by other countries, and will have to promote its pork effectively to reenter the global market, Liao said.

Fang Chih-yuan (方志源), a pig farmer with over 2,000 swine, told CNA he is incredibly moved that Taiwan has been designated FMD-free.

Referencing a letter of intent signed by a Singaporean company to purchase pork from Taiwan in late 2019, Fang said that he expects exports to begin later this year.