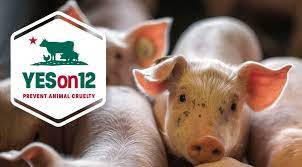 Next week the 9th U.S. Circuit Court of Appeals will hear a case to overturn California Proposition 12, an animal welfare measure approved by voters in 2018.

Officially the Farm Animal Confinement Initiative, Prop 12 bans the sale of eggs and pork and veal products in California unless production facilities meet animal-confinement standards dictated by the state. The practical impact of Prop 12 would be to impose California’s animal husbandry rules on producers throughout the country.

It is bad law, and should be struck down.

Article 1, Section 8 of the Constitution gives to Congress the power to regulate “commerce with foreign nations and among the several states.”

Plaintiffs argued that Prop 12 would upend pork production in the United States and make it all but impossible for the pork industry to cater to the California market without mandating that all producers adopt that state’s standard.

In similar cases the Supreme Court has adopted a two-tiered test to determine whether a state law violates the Commerce Clause.

First, laws that “discriminate against interstate commerce” or “directly regulate extra-territorial conduct” are generally stuck down.

Second, laws that “regulate even-handedly to effectuate a legitimate local public interest, and where its effects on interstate commerce are only incidental, will be upheld unless the burden imposed on such commerce is clearly excessive in relation to the putative local benefit.”

The district court found that plaintiffs failed both tests, ruling that the purpose of Prop 12 was not specifically meant to regulate activity in other states and that its impacts on interstate commerce are limited to those who directly sell to California.

On its face, Prop 12 deals solely with products sold within the state. The animal welfare advocates who backed the measure, however, knew the larger impacts of Prop 12.

Part of a litter of pigs born in Iowa could be sold to feeders in Nebraska while others could go to North Carolina. All of the pigs could go then to finishers in other states and end up in multiple packinghouses. Most of the animals that would be subject to Prop 12 reside outside California.

The nature of pork production, processing and marketing all but ensures that every out-of-state producer would have to comply with California rules.

Prop 12’s impacts on interstate commerce are anything but incidental.

We do not dispute California’s authority to regulate livestock production within its borders. But what if Texas, Florida or any of the other 49 states passes equally strict rules that are at odds with those outlined in Prop 12? How could a national food system function with 50 different sets of rules?

In similar cases, the 9th Circuit has upheld the Commerce Clause — as have several other jurisdictions. We await a favorable verdict.