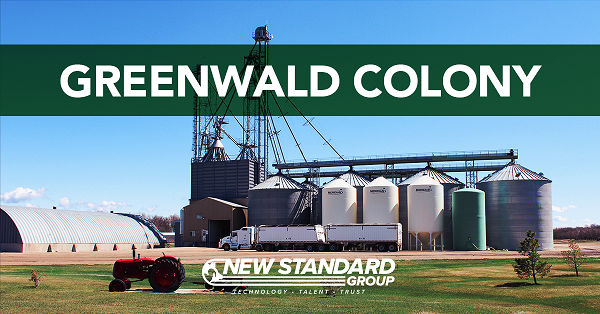 Tim and Kevin Kurbis grew up about 3 miles (as the crow fly’s) from Greenwald and have known many folks since they were children.

Tim and Kevin’s mother still attends a Annual Christmas Concert put on at the Colony, where their school children perform the nativity scene, among other performances, singing, instrumental pieces, and various skits or dramas. 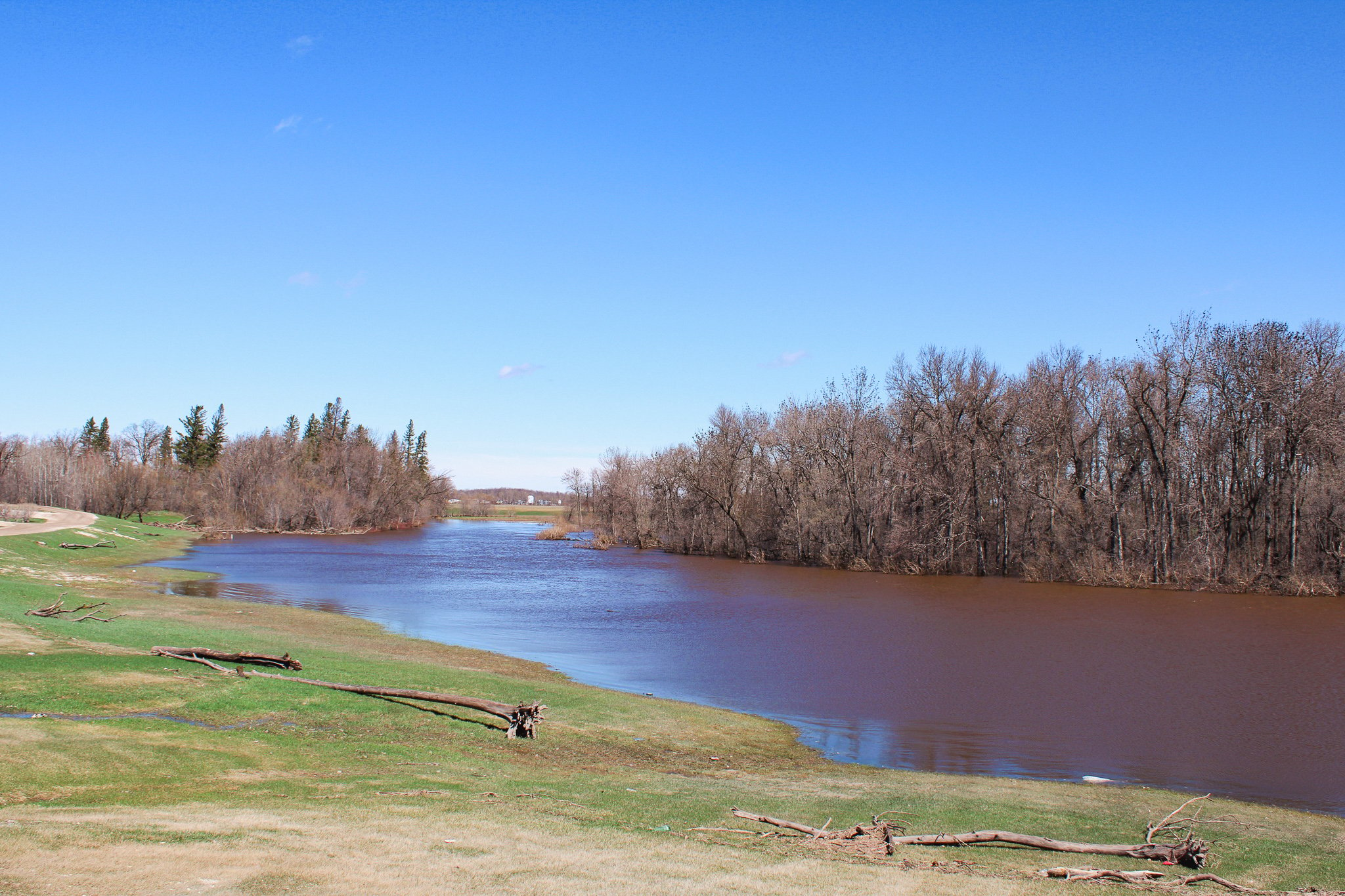 The Colony currently has a population of 36 families and 165 people, and a daughter Colony is already in the works for the near future. This is not the first time Greenwald has expanded and split into a new colony. In 1982 Greenwald divided to found Willow Creek Colony located in Cartwright, Manitoba. 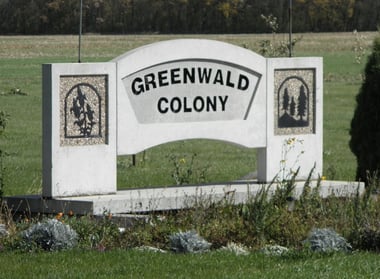 Greenwald is just part of a relatively sizable Hutterite community in Manitoba. The Hutterites originated from the anabaptist movement in the 1500s. The Hutterite name comes from Jacob Hutter, who was burned at the stake in 1536.

The third significant migration of Hutterites was to America, beginning around 1894. But in 1918, during World War I, many Hutterites in the United States experienced severe persecution as they were under suspicion of being “German,” even though this was false. Hutterites refused to take up arms during the war, & were given alternative services as conscientious objectors, both in the United States & Canada. Some would work in the medical field, others in mines, forestry, on farms and in factories. They were paid very little, most of what they made went to Red Cross.

Hutterites are pacifists, and their strong faith and convictions have been passed on for generations with minor changes or influence from culture. Hutterites strive to remain humble and out of the spotlight.

Greenwald Colony was founded in 1955 as a split from Barrickman Hutterite Colony. Greenwald sits on and utilizes approximately 10,000 acres of land. “It seems like a lot of land but once you divide it among our 165 residents it’s easy to see why we need every acre to sustain our way of life” explains Jason.

Greenwald is located about 20 minutes north of Beausejour, Manitoba, Canada, nestled along the banks of the Brokenhead River. The colony members enjoy use of the river for recreation and leisure activities, including fishing, swimming, and canoeing.

Greenwald Hutterites follow the Christian faith. One of Hutterites’ core beliefs and values is to follow the community of good, derived from Act 4:32-35.”

32 All the believers were one in heart and mind. No one claimed that any of their possessions was their own, but they shared everything they had. 33 With great power the apostles continued to testify to the resurrection of the Lord Jesus. And God’s grace was so powerfully at work in them all 34 that there were no needy persons among them. For from time to time those who owned land or houses sold them, brought the money from the sales 35 and put it at the apostles’ feet, and it was distributed to anyone who had need.” NIV 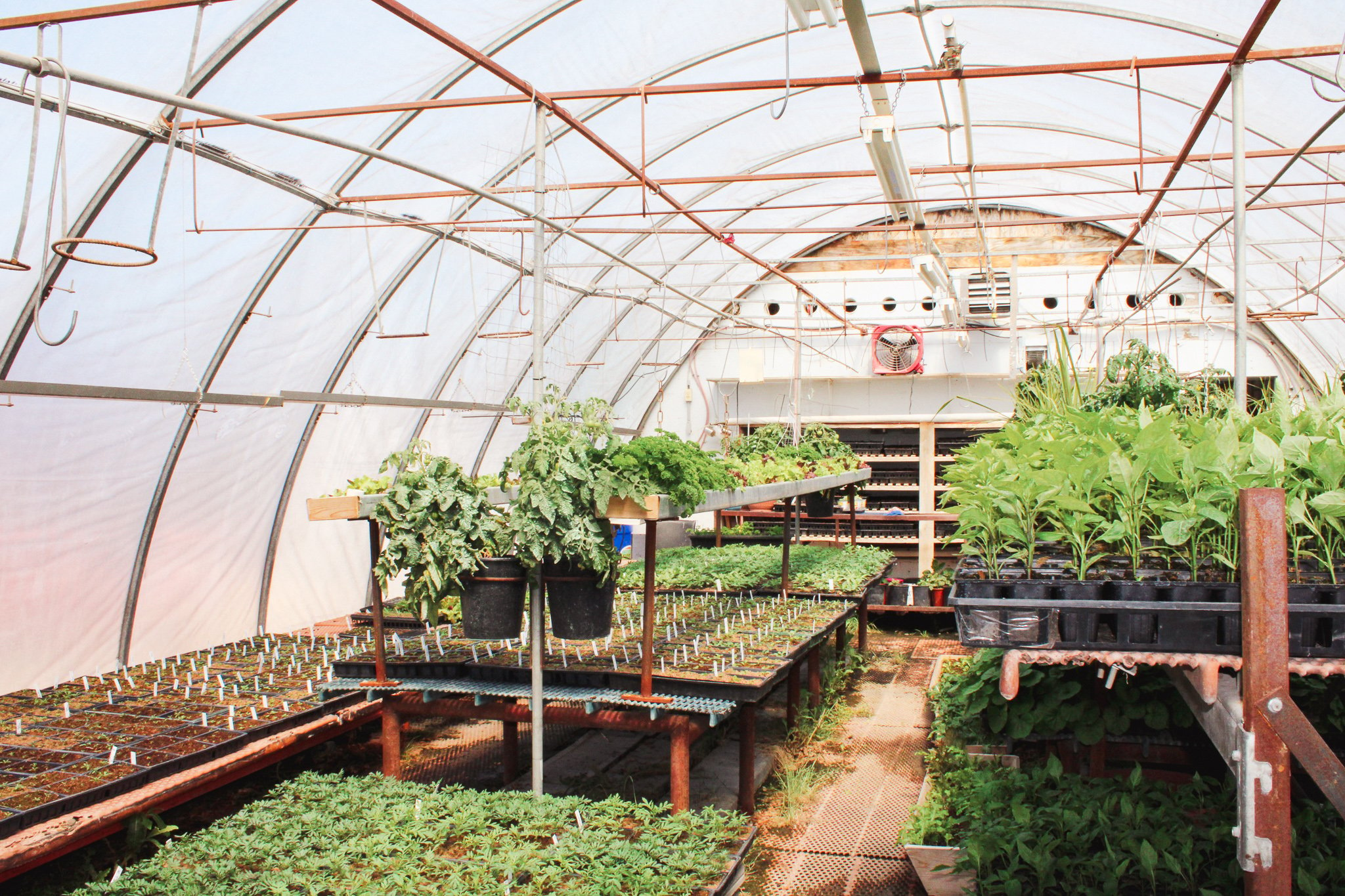 Greenwald is a self-sufficient community. “Our main source of income is our hogs and agriculture ventures,” states Jason. Although, staying true to the Community of Goods, “the entire colony is run out of one bank account,” everything is shared.

“We have our school on-site with a few outside teachers provided by the local school district and one of our own,” says Calvin.

Greenwald is blessed with a full-time head cook, other ladies help out on a rotating basis. Three meals a day are provided at the dining hall. “About 90% of our food is grown right here on-site”, says Calvin. “We are currently working on building a brand new greenhouse.”

Technology at Greenwald is something that is adopted as needed. Most have their own phone and internet access, although most content is filtered, so people only get what they need. Barns and new technology are great examples of this. “The new tech in our hog barn obviously requires internet access to allow us to reach the full potential of the barn and tech. We try and balance what we need with obvious benefits to keep things up-to-date and efficient.” 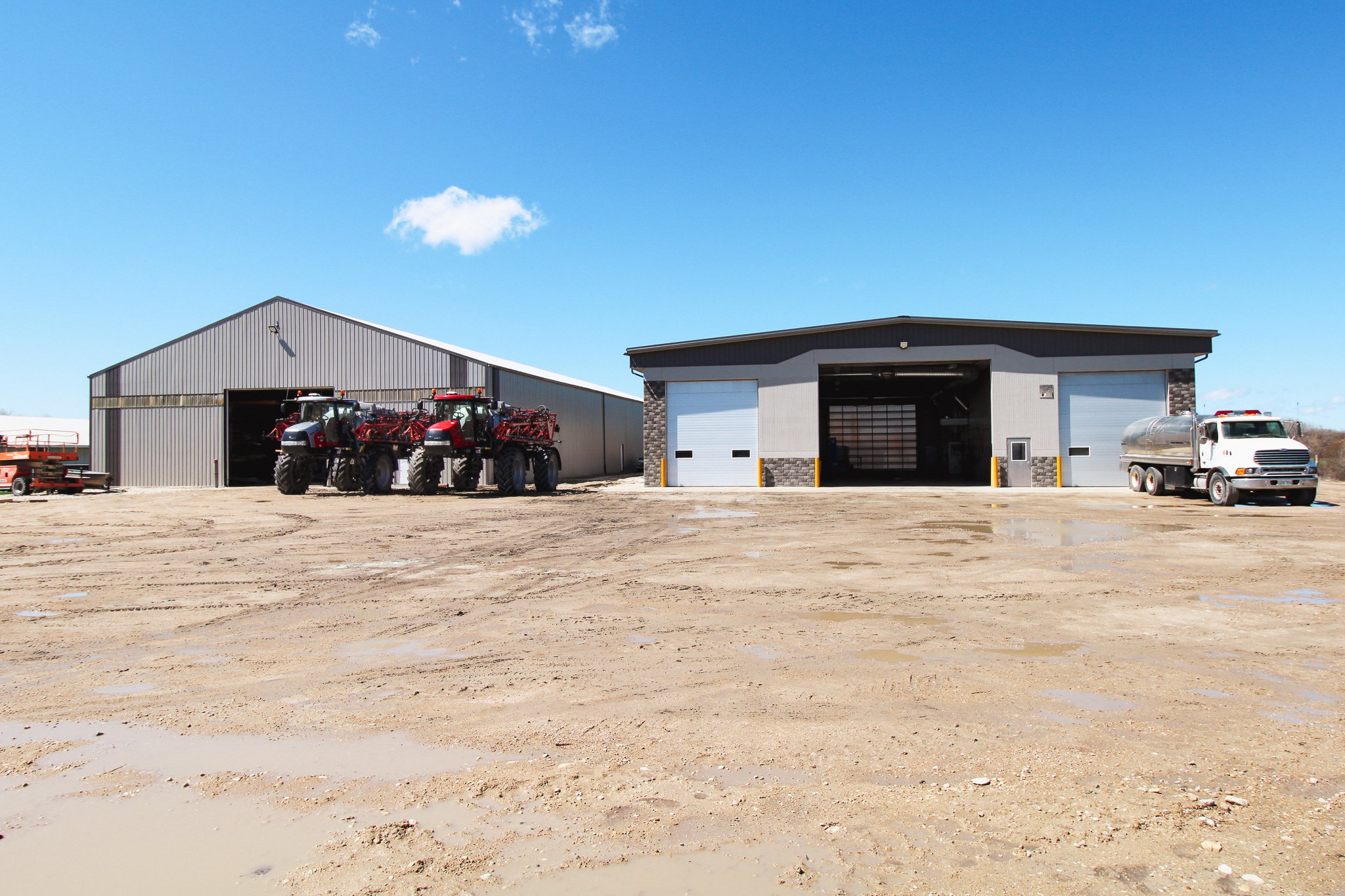 Greenwald is surrounded by fertile ground and grows various crops for use as animal feed and to sell. “We grow about 1,500 acres of winter wheat for feed and soybeans, barley, hard wheat, and canola.” Most of the grain produced gets consumed by the colonies livestock.

We have a 950 head, farrow to finish hog operation. We recently remodeled and updated by New Standard Ag. “We are super happy with the new remodel,” says Calvin.

Greenwald has an impressive layer barn “we currently have about 11,000 laying hens, says Calvin,” The eggs are sold to local coops and markets.

Broiler chickens are specifically bred and raised for meat production. The images that come into your mind when someone says chicken is precisely what a broiler looks like. Greenwald produces around 22,000 kg or just shy of 50,000 lbs of broilers each year.

The Colony stays busy year-round with its job shop and trailer manufacturing ventures. In addition, Greenwald is in partnership with ATCO and assisting in manufacturing mobile offices. These modular offices are used as office solutions on construction sites, special events, etc. 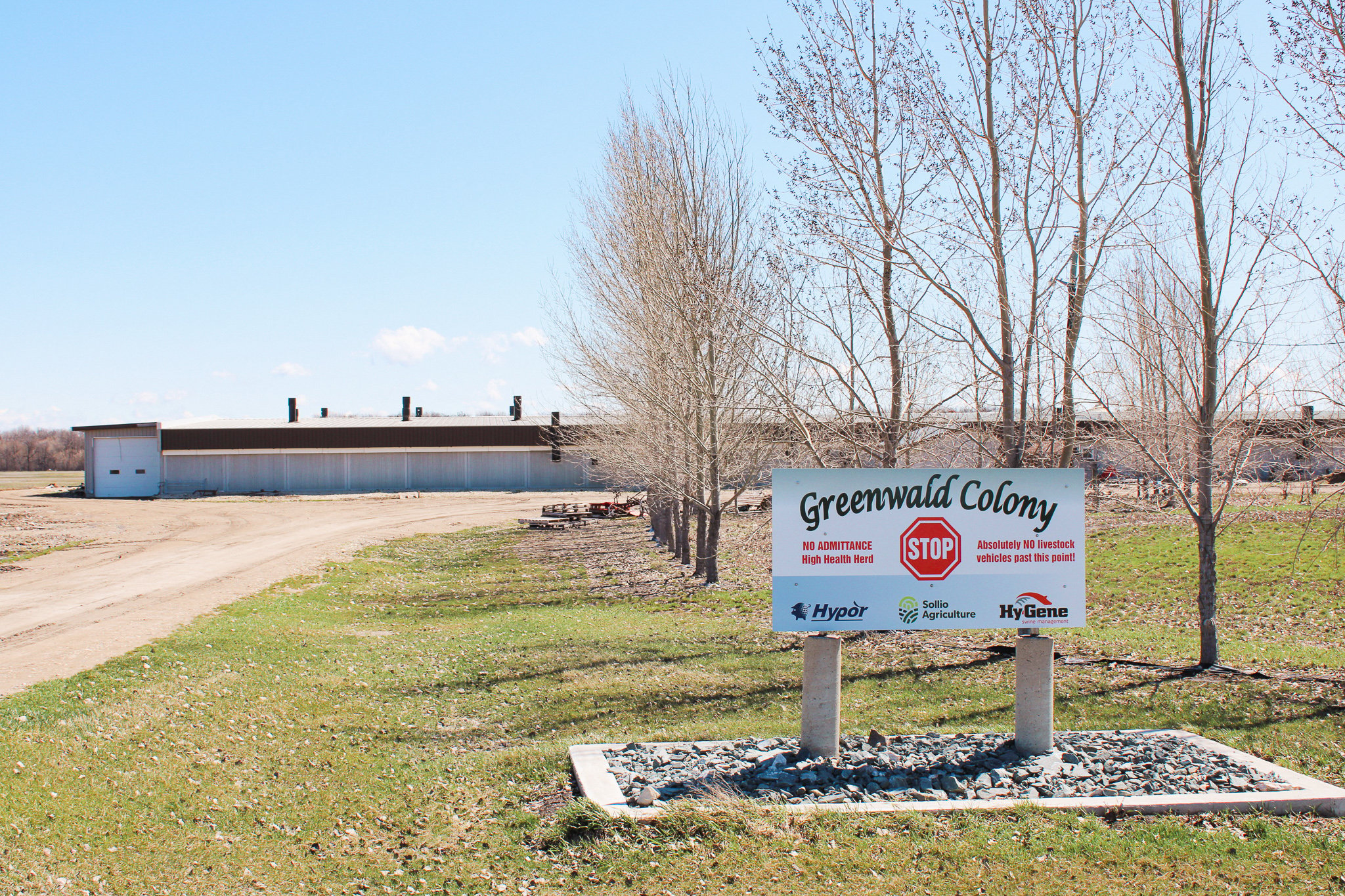 Completed in 2021, Greenwald Colony did a complete overhaul of its hog barn setup. The old barn was starting to show its age, and it was time to make a change. The ongoing maintenance and expenses of a stall barn were no longer making sense.

The final decision was to go with a group housing setup. New Standard’s Kevin Kurbis helped with consultation from start to finish. “It has been very successful” states Calvin. 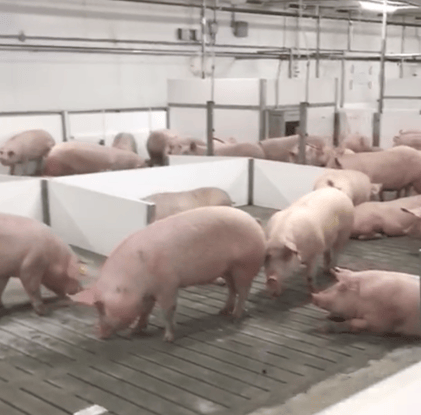 “When Greenwald approached me to come out and take a look at their barn, they were already aware they needed to do some work as they were going to be going through a de-pop of the barn to deal with a virus that had gotten out of control. As we discussed their needs and options, it quickly became obvious that the best plan would be to use the opportunity of the barn being empty to also modernize it and convert it to a loose housing setup. One of the biggest challenges that we face when converting a barn is what to do with the sows during construction, so this was a great chance to eliminate that issue. Greenwald’s barn is now fully operational ready for the future.”

The new barn has been wholly remodeled with updated flooring to handle manure differently and a new layout to accommodate the loose sow barn design.

Greenwald has also opted for electronic sow feeding. The Nedap system is completely automated and has been a great addition to the barn.

The barn remodels also incorporated new Fusion Controllers to help with all the other aspects of the building. The Fusion allows for tight control and instant feedback on barn conditions from light, ventilation, and heating.

The decision to go with loose housing has turned out to be a good one. “the sows simply look so much happier, and they are so much calmer than before.” states Calvin.

One huge benefit of group housing and the added tech is the time it frees up from staff once things are running smoothly. “it takes about a half a year, but even now, we are seeing we need fewer hours in the barn, we have more time for other projects and to help where it is needed.”

New Standard Group and the Kurbis family have been blessed to have Greenwald Colony as neighbors over the years. We hope you’ve found this tiny peek into the Hutterite culture exciting and insightful. If you ever have the opportunity to visit a colony, we recommend you accept.