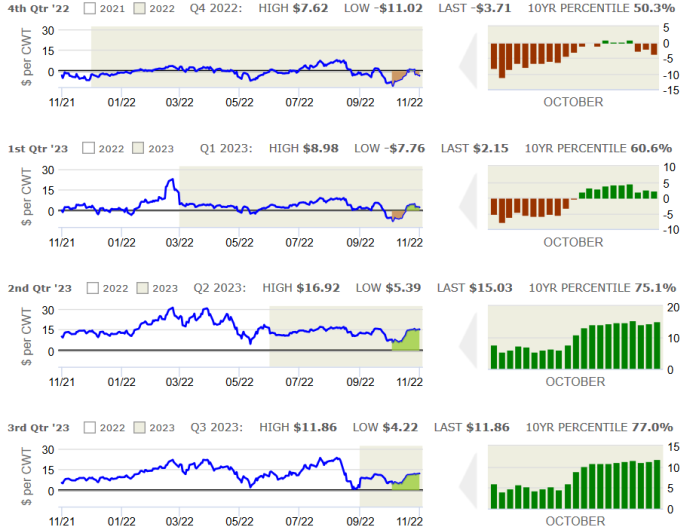 Margins continued to improve over the second half of October on firmer hog prices while feed costs held relatively steady. Strength in the pork cutout led by the ham primal has provided support for hog prices which is fueling the recovery. Export demand led by Mexico has also helped to underpin the hog market, as Mexico is a big buyer of hams. In the past six weeks, net pork sales to Mexico have averaged over 16,000 MT per week and outstanding sales to Mexico are up 3.4% from last year. A strengthening dollar following aggressive monetary tightening by the U.S. Federal Reserve has been a head wind for exports although the Mexican Peso has held its ground and not impacted Mexican purchasing power. Exports to other destinations such as Japan have also been impressive though, despite the Japanese Yen having weakened considerably relative to the USD. Hams have also been supported by strong domestic demand. With both Thanksgiving and Christmas around the corner, high turkey prices are allowing ham to be more competitive for holiday dinners. 5.4 million turkeys were lost this past spring due to the HPAI outbreak in commercial breeding operations, and another 2.2 million birds have been culled since late August. USDA’s latest Cold Storage report showed end of September inventories of frozen hams at 159.3 million pounds, down 2.7% from August and 18% below last year. A September drawdown in ham inventories is extremely rare, only previously occurring once over the past 10 years in 2019 when strong buying by China caused the pork cutout to continue advancing into mid-November. Our clients have benefited from recent adjustments to add upside price flexibility to existing hog hedges.