From the Technical Team of Chr. Hansen Inc.

The composition of the microbiota in the GI tract is not stable and fluctuates over time, especially in a young animal while it’s still growing and developing. Additionally, the microbial community differs throughout the various compartments of the GI tract: stomach, small intestine, large intestine, and cecum.

It is well understood that the microbiota plays a vital role in digestion and metabolism of feed and in other normal functions of the GI tract.  In addition, an ever-growing body of research and commercial observations support a link between measurable quality and diversity features of the microbiota and overall health and well-being of the pig.  In contrast, it has been observed that a disruption or dysbiosis of the microbiota can result in diarrhea and poor performance of animals of any age and can have particularly severe impact in young animals, e.g. weaned piglets.

In 1907 Metchnikoff founded the probiotic concept. Several definitions of probiotics have been suggested by scientists, but the definition given by Guarner and Schaafsma in 1998 is often used as this is the definition adopted by FAO/WHO: “Live microorganisms which, when administered in adequate amounts, confer a health benefit on the host”.

Effective probiotics support normal GI functions, specifically digestion, absorption, barrier, and immune functions.   With daily feeding of probiotics to pigs, there is a reduction in the incidence of GI tract disorders coincident with reduction in the relative prevalence of enteric pathogens.  This ultimately leads to a greater percentage of individuals performing normally compared to a contemporary group that isn’t receiving probiotics daily, and therefore a relative improvement in comparative performance. Probiotics act through a wide variety of modes of action, including, but not limited to, direct interaction with feedstuffs and other bacteria in the lumen of GI tract and with the epithelial surface of the intestines.  Daily feeding of effective probiotic bacteria has been associated with the development of a stable and properly diversified gut microbiota, with a beneficially-balanced ratio of symbiotic, commensal, and pathogenic organisms.  The exact mechanisms by which effective probiotics accomplish these benefits will vary with species, strain, and environmental conditions.

Modern swine production has reduced the opportunity for “natural” colonization of the GI tract. In the wild,  the normal rooting behavior of the pig ensures that a wide variety of bacteria enter its GI tract. Use of effective probiotics is a way to supplement the colonization process in pigs raised in captivity, while the microbiota of their GI tract is developing. The probiotic organisms will attach to adhesion sites on the surface of the intestinal epithelium. With these organisms in place, the binding of potentially pathogenic organisms, like E. coli, is prohibited.  Without attachment, there can be no colonization and no associated pathogenicity.

Figure 1 shows how probiotic strains can reduce the adherence of a pathogenic E. coli strain (F4) to  intestinal epithelium. The strains used in this study, B. subtilis and B. licheniformis together make up the commercially available product, BIOPLUS® 2B. It’s important to mention that this feature is not the same for all probiotic strains. The degree to which probiotic organisms can prevent or limit the adhesion of pathogens is strain specific; i.e., strains matter. 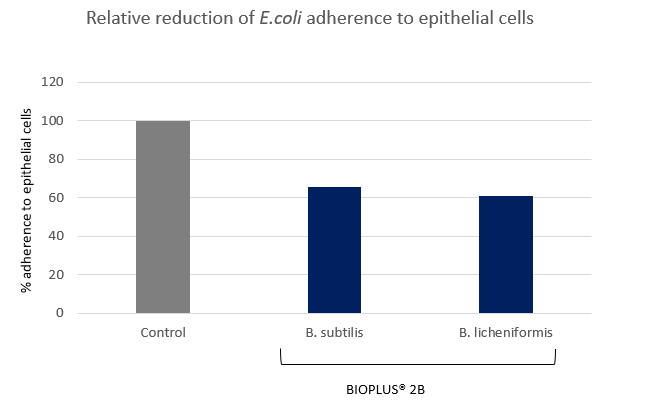 Figure 1. Relative reduction in adhesion of E. coli to instestinal cells when strains of BIOPLUS® 2B are present.

Development and maintenance of a healthy gut microbiota will result in normal, stable GI structure and functions. Supplementation with effective probiotics can be expected to positively impact the development of intestinal villi and to reduce the turnover of intestinal epithelium. More mature epithelial cells are better able than less mature epithelial cells to transport nutrients from the lumen of the intestine to the portal blood and into the body of the pig.  These nutrients would then be partitioned for maintenance, growth, and defense according to the needs of the individual.  The bottom-line is normal performance. BIOPLUS® 2B is a trademark of Chr. Hansen Inc.

Genesus Global Technical Report, Breeding for Pork Quality – What should be the focus?