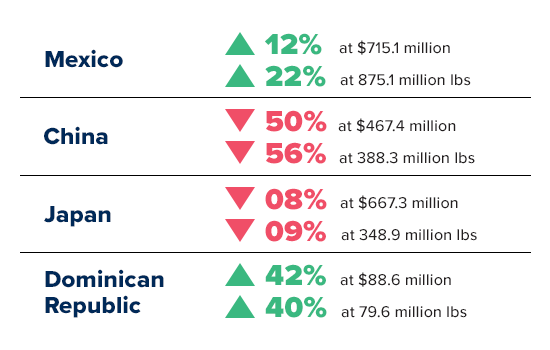 Year-to-Date (YTD) through May data:

May pork export value equated to $65.27 per head slaughtered, down 23% from a year ago but the highest monthly average since July 2021.

U.S. pork exports are still below year-ago levels, primarily due to a continued decrease in exports to China and Hong Kong. However, exports to Central America, Latin America and the Caribbean continue to grow.

Pork exports to Mexico continued to shine in May, as the largest destination for U.S. pork builds further on last year’s record performance.

U.S. pork exports to the Dominican Republic set a new record in April (60.8 million pounds) and nearly matched that total in May, increasing 126% from a year ago to 79.6 million pounds.

Exports to the Caribbean, particularly the Bahamas and the Leeward-Windward Islands, increased 38% in value ($113 million). Exports also trended higher to Honduras, the top market in Central America, as well as to Nicaragua. Our June webinar covered domestic weather patterns and predictions, global events in crop and livestock markets and the most recent USDA Hogs and Pigs Report. Two more cases of African swine fever (ASF) are confirmed in commercial operations in Germany. Affected operations are in the eastern state of Brandenburg and the western state of Lower Saxony, which is a major region of swine production.

Germany’s export market was already distressed as imports have been banned from several countries following the first confirmed case in the feral hog population in September 2020.

If a foreign animal disease such as ASF enters the U.S., it would likely eliminate the entire export market for an unknown period.

Here are 3 things U.S. pork producers can do to protect their farms and the domestic pork industry from the threat of ASF: