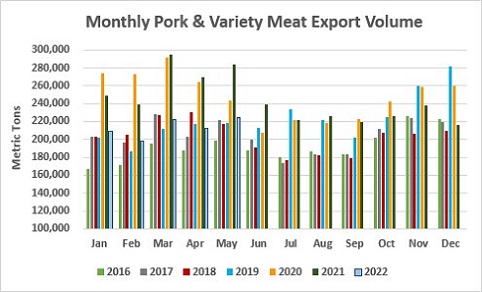 “On the pork side, exports are still trailing the enormous totals from the first half of last year, but we’re seeing upward momentum in several markets,” Halstrom explained. “Shipments to Mexico are on a record pace and demand is strong across most of the Western Hemisphere. China’s hog prices have increased about 40% since mid-June, which supports our forecast for some rebound in China’s demand for imported pork toward the end of the year. Even when China pulls larger volumes from other suppliers, this has a positive impact for U.S. pork in a number of international markets.”

Last year exports exceeded $2 billion to each of the three top destinations for U.S. beef: South Korea, Japan and China/Hong Kong. Export value to all three is up significantly in 2022, with each topping $1 billion in just five months.

Other January-May results for U.S. beef exports include:

Pork exports to Mexico continued to shine in May, as the largest destination for U.S. pork builds further on last year’s record performance. May exports totaled 79,849 mt, up 12% from a year ago, while value climbed 13% to $171.2 million. Through May, exports to Mexico increased 22% to 396,934 mt, valued at $715.1 million (up 12%). To combat inflation, Mexico recently suspended import duties on pork muscle cuts for one year. While this move could attract more product from the European Union, the U.S. industry’s other main competitors – Canadian and Chilean pork – already had duty-free access under existing trade agreements.

Following a record year in 2021, pork exports to Colombia started this year slowly but increased sharply in the second quarter. After a strong April, exports reached 9,710 mt in May (up 17% from a year ago), valued at $21.9 million (up 10%). Through May, exports to Colombia remained 1% below last year’s record pace in volume (40,693 mt) and 2% lower in value ($92.1 million). Although a large percentage of U.S. pork exported to Colombia is for further processing, the U.S. industry has made significant inroads in Colombia’s retail and foodservice sectors.

Other January-May results for U.S. pork exports include:

May exports of U.S. lamb increased 35% from a year ago to 1,856 mt, while export value climbed 40% to $2.55 million. Lamb muscle cut exports posted robust growth in Mexico and the Caribbean, led by the Netherlands Antilles and Dominican Republic.