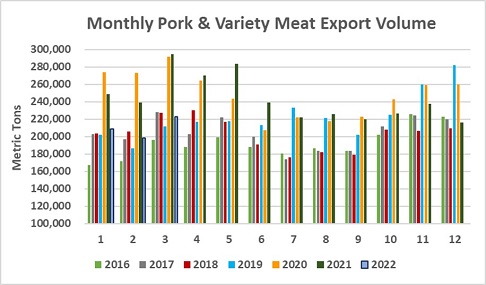 “While pork exports were down significantly from last year’s record, we saw some encouraging trends in the March results,” Halstrom explained. “U.S. pork commanded a higher price per pound than a year ago, with outstanding demand from Mexico and value growth in key markets such as South Korea and the Dominican Republic. The stronger U.S. dollar creates more price pressure in some destinations, but this will be offset to some degree by the narrowing price gap between U.S. and European pork.”

First quarter exports to Korea were 75,445 mt, up 9% from a year ago, while export value climbed 57% to $792.6 million. Export growth to Korea has been largely driven by soaring retail demand, but the foodservice climate received a boost in April as Korea removed all COVID-related limits on restaurant operating hours and lifted most social distancing restrictions on consumers.

China has taken a decidedly different approach to COVID outbreaks, recently imposing lockdowns in several large population centers. These policies have made it difficult for U.S. exporters to supply beef and pork to China and slowed demand from confined consumers. However, these developments will likely have a more significant impact on second quarter export results. COVID restrictions also slowed demand in Hong Kong, where the mandatory closing time for restaurants was only recently extended from 6:00 to 10:00 p.m. and the per-table limit was raised from two people to four.

Other first quarter results for U.S. beef exports include:

Following a record year in 2021, pork exports to Mexico continue to climb to new heights. March exports reached 82,348 mt, up 24% from a year ago, with value increasing 14% to $149 million. First quarter exports to Mexico soared 30% to 243,314 mt, valued at $404.2 million (up 17%). While a large percentage of U.S. pork shipments to Mexico are bone-in hams and other cuts destined for further processing, the U.S. industry has also made impressive gains in Mexico’s retail and foodservice sectors.

Demand for U.S. pork continues to strengthen in the Dominican Republic, where domestic production has slowed due to the presence of African swine fever. March exports increased 7% from a year ago to a record 7,038 mt, valued at $17.9 million (up 15%). First quarter exports to the DR also increased 7% to 22,416 mt, with value up 12% to $45.6 million. With shipments also trending higher to the Bahamas and Leeward-Winward Islands, first quarter exports to the Caribbean increased 5% in volume (22,416 mt) and 15% in value ($59 million).

March exports to Honduras, the largest Central American destination for U.S. pork, were the second largest on record at 5,487 mt, up 3% from a year ago, with value steady at $11.4 million. First quarter exports to Honduras were still down 6% in both volume (12,024 mt) and value ($25.1 million). Exports to Central America remained relatively strong in the first quarter but were below last year’s record pace by 14% in volume (30,729 mt) and 9% in value ($81.9 million) as importers built inventories in the fourth quarter of last year.

Other first quarter results for U.S. pork exports include:

March exports of U.S. lamb increased 75% from a year ago to 1,906 mt, the largest volume since 2011 and the third largest on record. Export value nearly doubled to $2.88 million, up 95% and the highest since 2014. Growth continues to be led by variety meat exports to top market Mexico, but muscle cut demand also rebounded in Mexico and the Caribbean and showed promising growth in the Philippines.