What are nucleotides and when are they needed?

Nucleotides are the components of DNA and RNA in cells.  They are typically supplied by the digestion of nucleoproteins in feed.  During the stress-filled days immediately after weaning, feed intake drops, and digestive capacity is reduced.  This occurs at a time of rapid cellular division and high metabolic demand for nucleic acids and cellular components.  These feed intake changes can increase the demand for free nucleotides beyond what is available.  While pigs can synthesize some, most are supplied from feed ingredients.  When feed intake and digestive capacity are low, supplemental free nucleotides become beneficial.

During a typical digestive process, the digestive enzymes in the small intestine harvest the nucleotides from RNA and DNA in feed and then cleave off the phosphate groups to provide free nucleosides for absorption (See Figure 1).
Figure 1.  Nucleotides and Nucleosides.

The nucleoside is the predominate form that is readily absorbed by the small intestine, with over 90% of nucleic material absorbed as nucleosides (See Figure 2).  Digestion and absorption require several digestive steps from nucleotide-rich proteins in feed to free nucleosides (Hess and Greenberg, 2012).  After weaning, when feed intake and digestion are reduced, a growth lag can occur.  NucleoSaf 600, a baker’s yeast extract, is processed to free nucleotides, helping reduce the post-weaning intake and performance lag.

Figure 2.  How Nucleosides are processed and absorbed.  (Hess and Greenberg, 2012). 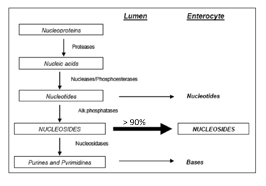 Three phases were fed, d 0 to 7, d 7 to 21, d 21 to 42. Pig weights and feed use were recorded weekly, while mortality and morbidity were recorded daily to estimate growth performance. A common phase 3 diet was fed.  Diets were antibiotic-free and are available upon request.

Average daily gain differed during d 7 to 21 (P < 0.01).  Pigs fed the AS+NS treatment had the highest ADG (See Figure 3). Average daily feed intake was also affected.  From d 7 to 21, ADFI tended to be different among treatments (P< 0.06), with pigs fed the AS+NS treatment having the highest ADFI (P <0.05; See Figure 4).  No growth performance differences were observed in other phases.  Numerical trends with AS +NS resembled differences observed from d 7 to 21. More detailed growth performance results are available upon request.

Weekly average body weight differed between the PC and AS+NS treatments on d 14 and d 21, with pigs fed the AS+NS treatment being highest (P < 0.05; See Table 1). These results suggest that ActiSaf HR+ and NucleoSaf 600 can effectively replace spray-dried plasma in weaned pig diets. 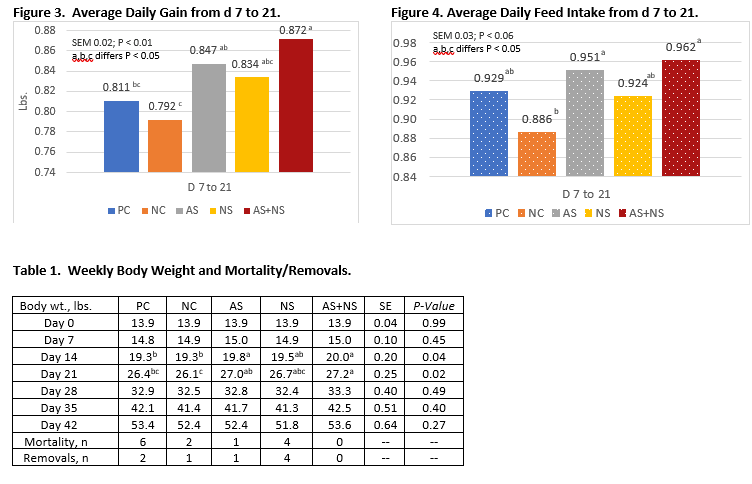