What is Heat Stress?

Heat stress occurs when a pig is unable to maintain a comfortable body temperature due to high environmental heat and humidity.  This becomes especially critical in larger pigs like sows who have a high metabolic rate and limited ability to cool themselves.  When this occurs, the internal body temperature rises, and heat producing metabolic functions like digestion, physical activity, feed intake, fertility and milk production are reduced (see table 1). 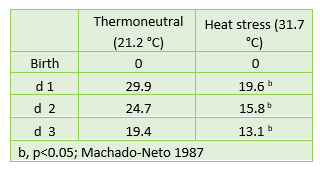 Using ActiSaf HR+ and SelSaf to help offset the effects of heat stress.

Nutrition, management and environmental accommodation can all help reduce heat stress effects. ActiSaf HR+ and SelSaf are part of these tools that help sows and their offspring better manage the effects of stress, lower feed intake, and immune challenges.  By doing so, they help the sow and litter maintain productivity, immune function, health and growth performance.

ActiSaf HR+ is a carefully selected Saccharomyces cerevisiae strain of active dry yeast that is pellet stable while also maintaining high viability in mash feeds.  It has been selected from over 9,000 strains of yeast in the Lesaffre yeast library. ActiSaf HR+ has demonstrated benefits when fed to sows at rates of 2 to 5 grams/head/day.  The feeding rate varies based upon level of stress and specific benefits sought by individual producers. ActiSaf HR+ has many benefits for sows and offspring that become especially valuable during heat stress.  Sows fed ActiSaf HR+ have shown improved energy digestibility with a 28% increase in volatile fatty acid (VFA) fermentation yielding more VFAs to be absorbed for metabolic energy needs.  ActiSaf HR+ has also shown improvements in sow backfat levels at weaning and litter weaning weight (see Figure 2).

In addition to the benefits associated with improvements in sow body condition and litter weight gain, ActiSaf HR+, as a yeast probiotic, is known to stimulate the gut immune system through both the nonspecific pattern recognition receptor pathway and the toll-like receptors that stimulate improved gut epithelial tissue structure.  It has also stimulated increased antibody levels in the sows fed ActiSaf HR+ (see Figure 3).  This increased antibody production via the dendrite signaling pathway helps increase the antibodies which can protect against diseases that overwhelm the first level of immune defenses and is passed on to the piglets via passive immunity in the colostrum.  This becomes even more critical when IgG levels decline during heat stress as observed in Table 1. 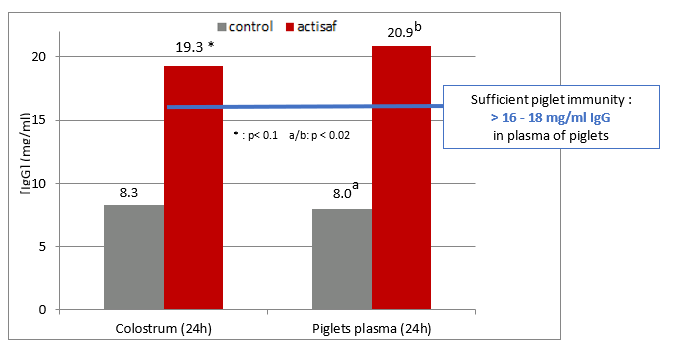 The effects of heat stress and other inflammatory stresses are minimized with proper nutrition and management practices.  Part of these tools include the use of heat-stable ActiSaf HR+ yeast probiotic to improve gut health, nutrient digestibility, passive immune transfer to piglets, litter growth rates, sow body condition and productivity.  An additional tool to help minimize the effects of oxidative stress during heat stress and periods of lower feed intake is the use of SelSaf selenium yeast to provide a dual-action source of selenium yeast to support optimal metabolic activity and higher selenium reserves.