Background: Crop production, harvest and storage improvements have reduced the amount and number of mycotoxins in feed grains.  Even with these improvements, data suggests that mycotoxins remain a significant problem for livestock producers. Recent crop surveys by private labs and companies over the past five years, indicates that more than 70% if complete feed and individual ingredients were positive for at least one mycotoxin.  Other studies indicate that several of these mycotoxins are analogs of each other, resulting in multiple mycotoxins present in the sample.  It has been demonstrated that the presence of multiple mycotoxins in feed compounds their toxicity because of synergies between some mycotoxins (Smith et al. 1997; Alassane‑Kpembi, Puel and Oswald, 2014).

Mycotoxin Effects: Mycotoxins such as zearalenone are linked to an increased incidence of irregular heats, low conception rates, embryonic loss and abortions. Animals also suffer lower production and performance issues, alongside an increase in susceptibility to infectious diseases. The presence of mycotoxins in feed is also linked to poor gut integrity, diarrhea, inflammation of the bladder and kidney. Very severe cases of mycotoxicosis can also result in significant losses from higher morbidity and mortality (Osweiler and Ensley, 2012). 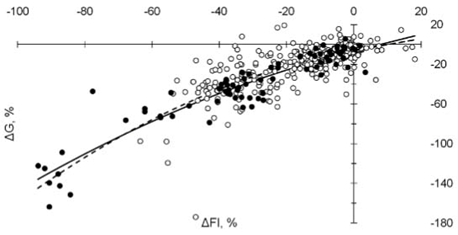 Reducing Mycotoxin Risk: Since mold and mycotoxins can occur during both before and after grain harvest, some mycotoxins can be controlled with good feed and ingredient handling practices, including proper grain drying, mold inhibition, and moisture control during storage.  Conversely, pre-harvest mycotoxins still develop and can affect breeding sows and growing pig well-being and performance.  When unchecked, mycotoxicosis can cause lower growth rate, loss of appetite, poor reproductive performance, embryonic death and reduced immunity. These effects require pork producers and feed suppliers to focus their attention on cost-effective ingredients that have demonstrated ability to reduce mycotoxicosis in pigs. These ingredients, which are often added for growth performance and health benefits or feed flowability, also help reduce mycotoxin impact on animal health and performance. These ingredients often include yeast products, aluminosilicate clays, essential oils, diatomaceous earth, dried peat; sodium metabisulfite, amongst others. The role of these ingredients is well understood by animal care and health professionals as well as the animal feed industry.  These ingredients either preferentially bind to mycotoxins or chemically change the mycotoxin and reduce or eliminate its toxicity.

SafWall®: Phileo by Lesaffre has over 30 years of research and development experience to deliver animal health and performance solutions based on live yeasts, bacteria and yeast products.  Phileo by Lesaffre is focused on helping to mitigate the impact of mycotoxins on livestock.  Our yeast cell wall extract, SafWall® provides immune stimulation, reduced oxidative stress; improved gut integrity.  In addition to these benefits, testing has demonstrated that it also binds to mycotoxins.  This binding likely reduces the mycotoxins ability to bind to the gut wall.  SafWall® is a preferred, cost-effective solution when mycotoxins are present in feed. This benefit helps protect from performance losses, reduced animal well-being, and associated economic losses (see figure 2). 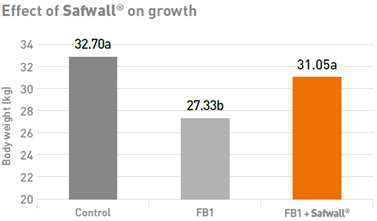 Phileo by Lesaffre selected SafWall® from a variety of yeast extracts using adsorption isotherms. It has been used in numerous laboratory tests with most common mycotoxins such as trichothecenes, fumonisins, and zearalenone. Results from these repeatedly demonstrate its effectiveness.  For example, when Safwall® was added to pig feed containing zearalenone, affected pigs had lower reproductive organ weights, like the control diet without zearalenone (See figure 3).

Summary: Even with current best management practices for agronomy, feed ingredient storage and feed manufacturing, mycotoxins are present in livestock feed.  There are dozens of know mycotoxins that can affect animal performance, well-being and profitability.  Several feed ingredients are known to help reduce the effects of mycotoxicosis in livestock.  A combination of these products, including SafWall® from Phileo by Lesaffre have demonstrated effect when included in pig feeds containing a range of mycotoxins.  Please consult your veterinarian and nutritionist when dealing with mycotoxins to most effectively minimize their effects on herd and animal performance and well-being.