Current consumer preference trends and increasing government regulation continue to drive interest in reduced antibiotic use and increased use of antibiotic alternatives, such as yeast probiotics. ActiSaf HR+ is a protected, proprietary strain of saccharomyces cerevisiae yeast is among the most commonly used probiotics in swine feeding programs.  Usage has increased as pork producers and nutritionists continue to seek effective gut health and growth performance solutions that are not medications and are not rendered blood proteins. ActiSaf HR+ confers benefit to pigs through several mechanisms, including direct binding of pathogenic bacteria, increasing cooperative activity of gut microbiota, reduced intercellular permeability, and immune stimulation via dendrite and macrophage activation pathways. Additionally, ActiSaf HR+ helps prevent pathogen colonization on the intestinal mucosal through direct antagonism and competitive inhibition. This is caused by the binding of certain pathogenic bacteria, including e. coli and salmonella to the yeast cell wall components (See Figure 1).  Preferential adhesion and accumulating agglutination of the pathogenic bacteria to ActiSaf HR+ causes removal from the digestive tract as well as limiting adhesion to the intestinal wall (See Table 1). As expected, when pathogenic challenges are acute, increasing the dosage of ActiSaf HR+ for a short duration can reduce inflammation and improve performance by effectively binding larger quantities of pathogenic bacteria and allowing the pig a greater opportunity to mount an effective immune response to the remaining pathogens (See Figures 2 & 3). 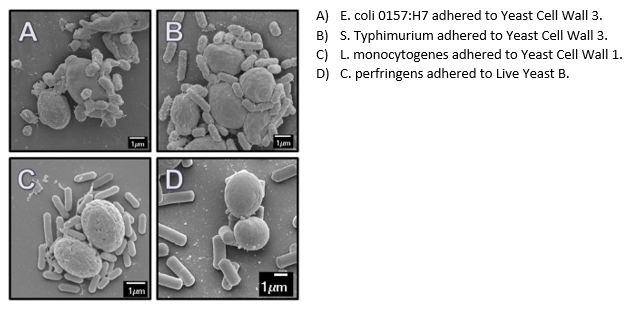 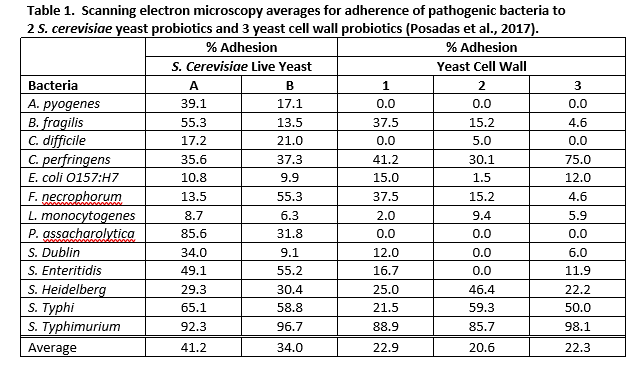 gure 3.  Effects of super-dose ActiSaf HR+ during the 3 days immediately preceeding and the 5 days following parturition in a commercial sow herd.  Each bar represents the weekly average number weaned per litter.  The green bars are from sows fed the ActiSaf HR+ regimen below. The red line indicates the average litter weaning weight (kg). (commercial farm, Phileo, 2019). 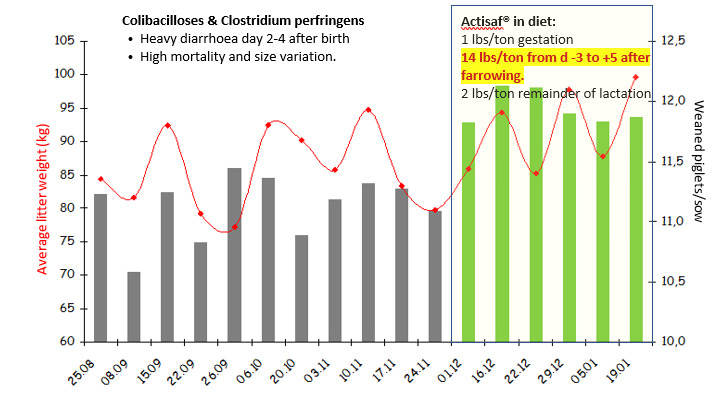 These improvements in pig health and performance continue to be studied further by Phileo and by our customers.  Current research also suggests that using ActiSaf HR+ in sow and weaned pig diets reduces or eliminates the need for high levels of ZnO after weaning.  Further, feeding ActiSaf HR+ may reduce the proportion of antibiotic resistant bacteria in fecal swab samples.  Research is ongoing to more fully validate these exciting results.  When taken in context with the results shared above, it is apparent that the feeding of ActiSaf HR+ to sows and weaned pigs improves the gut microbiota and herd productivity.  The increased survival and weight of pigs at weaning has an immediate cost and profitability benefit for the pork producer.