Soybean meal (SBM) is the major source of amino acids in diets for swine throughout the world. However, in addition to providing indispensable amino acids to diets, SBM also provides energy to the diets. Diets are often formulated based on the net energy (NE) in each individual ingredient using a linear programming computer software. Therefore, the NE for each ingredient is important for the value the ingredient is assigned in the formulation. However, the NE for SBM that is used by most feed formulators was generated many years ago, but results of recent research indicate that current U.S. SBM may provide more NE than previously estimated, which potentially results in an increased estimation of the value of SBM in diets for pigs. There is, therefore, a need for confirming or updating the NE value for SBM. As a consequence, the objective of this experiment was to test the hypothesis that the NE in U.S. SBM fed to modern genotypes of pigs is greater than the value that is currently used in feed formulation.

Six diets were formulated. The basal diet contained corn (gross energy: GE = 3,824 kcal/kg) as a sole source of energy and contained no SBM. Five additional diets were formulated to contain corn and 15, 25, 35, 45, or 55% SBM (GE = 4,182 kcal/kg), respectively. A total of 24 growing pigs (initial body weight: 26.5 ± 1.0 kg) were housed in groups of 4 pigs in 6 indirect calorimeter chambers and allotted to 6 diets using a 6 × 6 Latin square design with 6 diets and 6 periods. Therefore, there were 6 replicate chambers per diet for the 6 periods. Each chamber was equipped with a stainless steel wet-dry feeder, and an auxiliary nipple waterer was available in each chamber to ensure free access to water. Each chamber was equipped with a slatted floor, 4 stainless steel fecal screens, and 2 urine pans for total, but separate, collection of fecal and urine materials. The temperature and relative humidity inside the chambers were controlled and maintained at the same levels in all chambers.

Throughout the experiment, pigs were allowed ad libitum intake of feed. Diets were fed for 13 d, where the initial 7 d were considered the adaptation period to the diet. On d 8, gas analyzers started measuring O2 consumption and CO2 and CH4 production. Fecal and urine samples were also collected from d 8 to d 13; All collected fecal samples and 5% of the urine were stored at −20 °C immediately after collection. At 0700 h on d 14, pigs were deprived of feed for 36 h. This time was considered a fasting period to determine fasting heat production (FHP). Therefore, each period lasted 14.5 d.

Concentrations of O2, CO2, and CH4 were averaged within each collection period and diet. Total heat production (THP) from pigs fed diets during the collection period were calculated using the following equation (Brouwer, 1965):

where metabolizable energy (ME) was in kcal/kg, THP and FHP were in kcal, and feed intake was in kg.

Concentrations of digestible energy (DE), ME, and NE in SBM were calculated using the regression method (Adeola, 2001). Regression of SBM-associated DE, ME, and NE intake against SBM intake of pigs was conducted.

The ATTD of GE in corn and SBM was less than previous values (NRC, 2012), which resulted in less DE in corn and SBM used in this experiment. In most metabolism trials in which one pig is housed in a metabolic crate, pigs are limit fed whereas pigs that are group-housed in a pen are allowed ad libitum access to feed, but it is likely that group housed pigs allowed ad libitum intake of feed have reduced ATTD of GE compared with restricted fed and individually housed pigs. However, due to lower heat losses than previously determined, NE in SBM was greater than previous values (Sauvant et al., 2004; NRC, 2012; Rostagno et al., 2017). This confirms the hypothesis that the NE in U.S. SBM fed to modern genotypes of pigs is greater than the value that is currently used in feed formulation. The reason for the lower heat losses from pigs likely is that groups housed pigs are able to huddle and therefore possibly lose less body heat.

Table 1. Concentrations of DE, ME, and NE in diets fed to growing pigs that were group-housed in indirect calorimeter chambers1 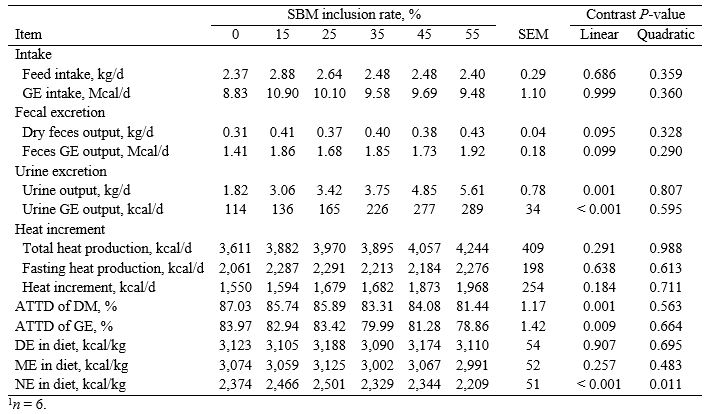 One Million Servings of Pork Donated to Food Banks

Compass Group to phase out gestation crates by summer 2023