Ten growing pigs (initial BW: 54.2 ± 4.5 kg) were equipped with a T-cannula in the distal ileum and allotted to a replicated 5 × 4 Youden square design with 5 diets and 4 periods. Two pigs were assigned to each diet within each period; therefore, there were 8 replicate pigs per diet. Each source of soybean expellers was included in 1 diet as the sole source of AA, and an N-free diet was formulated to measure basal endogenous losses of AA; thus, a total of 5 diets were prepared. Each experimental period lasted 7 d. Ileal digesta were collected on d 6 and 7 of each period, and ileal digesta were analyzed for AA to calculate SID of all AA.

A corn-based diet, plus 4 diets containing corn and each source of soybean expellers were formulated; thus, a total of 5 diets were prepared. Forty barrows (initial BW: 17.5 ± 1.6 kg) were housed individually in metabolism crates and allotted to the 5 diets with 8 replicate pigs per diet. Feces and urine samples were collected using the marker-to-marker approach with 5-d adaptation and 4-d collection periods. Samples were analyzed for gross energy (GE) to calculate for the apparent total tract digestibility (ATTD) of GE, as well as concentrations of DE and ME in each diet. The DE and ME values of each source of soybean expellers were calculated using the difference procedure. 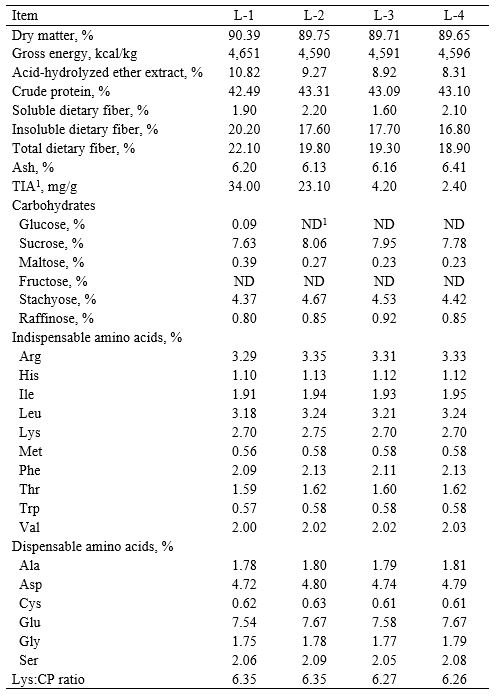 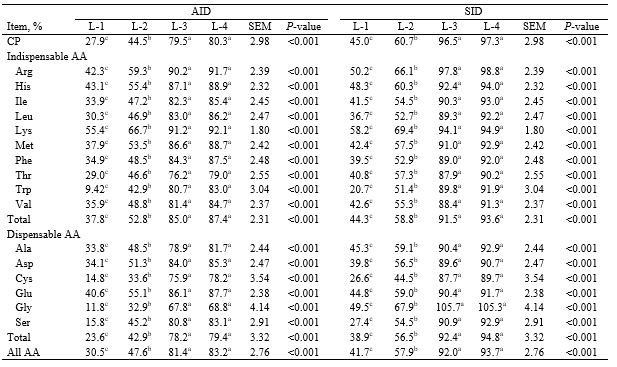 1Data are least squares means of 7 to 8 observations per treatment.

a-cMeans within a row lacking a common letter are different (P < 0.01).

1Data are least squares means of 7 to 8 observations per treatment.

a-cMeans within a row lacking a common letter are different (P < 0.01).