MHYOSPHERE® PCV ID is a new, all-in-one intradermal vaccine against M. hyopneumonaie (Mhyo) and PCV2. The aim of this study was to assess its efficacy in the reduction of Mhyo-like lung lesions and PCV2 viraemia under field conditions.

Seven commercial farms with Mhyo and PCV2 circulation were included in a  multicentre, randomized, negative-controlled and blinded field trial. In total,  2,507 healthy 3-week-old piglets were distributed into two groups. One group  (n = 1,253) was vaccinated with MHYOSPHERE® PCV ID, whilst the other group  (n = 1,254) received a placebo. A single dose of 0.2 ml was administered  intradermally to both groups using a needle-free device (Hipradermic®) and  they were then monitored up to slaughter. The primary efficacy variables were  Mhyo-like lung lesions at slaughter, evaluated in all the animals as described in  the Ph. Eur.1 , and PCV2 viraemia, evaluated by qPCR (VetMAXTM PCV2 Quant Kit,  Thermo) in 30 animals/group/farm periodically sampled over the study. PCV2
genotyping was performed by PCR2.

RESULTS
The mean percentage of lung surface affected by Mhyo lesions at slaughter  was significantly lower in the group vaccinated with MHYOSPHERE® PCV ID  than in the Placebo group (10.94 % vs 13.52 %, respectively; p < 0.0001,  Mann-Whitney U test), corresponding to a 19.1 % reduction. In addition, the  incidence of pigs with at least one Mhyo-like lung lesion was also significantly  lower in the vaccinated group (p < 0.01, Chi-square test). The distribution of  the severity of lung lesions is shown in Figure 1. 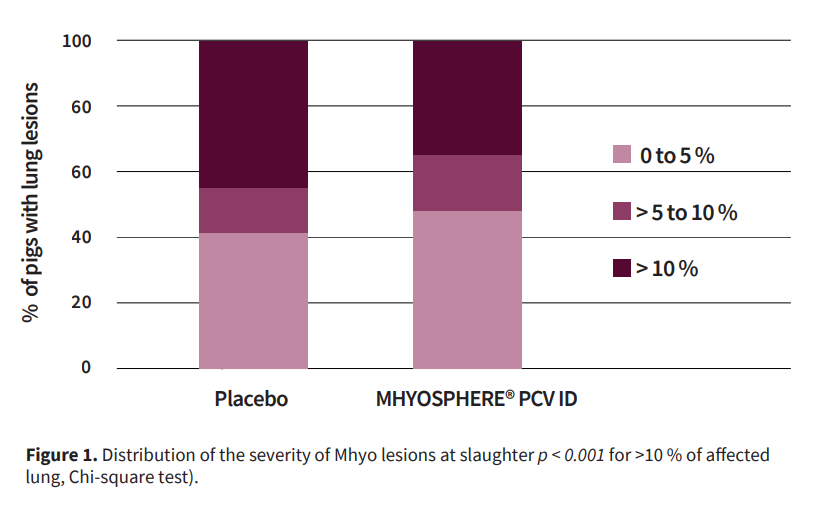 The PCV2 virus load was lower in the vaccinated group from weaning to  slaughter (Figure 2). The genotyping results indicated that one out of seven  farms was positive for PCV2a, three for PCV2b and two for PCV2d. A single  genotype was found on each farm. The remaining farm had very low PCV2  circulation and genotyping was not possible. When grouping the farms by  genotype, the Area Under the Curve (AUC) was statistically lower (p < 0.001,  Linear Mixed Model) in the vaccinated pigs compared to the controls: 40.03 vs 54.06 for PCV2a; 11.61 vs 31.76 for PCV2b and 33.84 vs 53.87 for PCV2d. 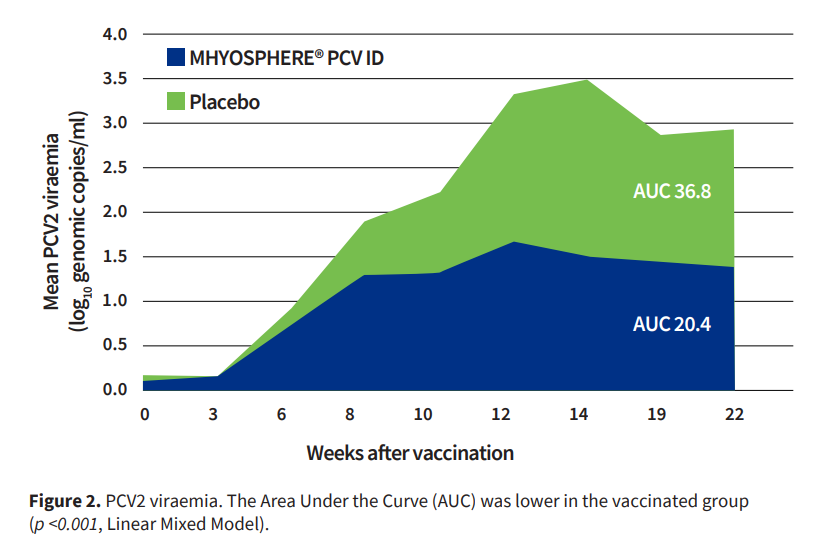 The authors wish to thank HIPRA R+D staff for their technical assistance.