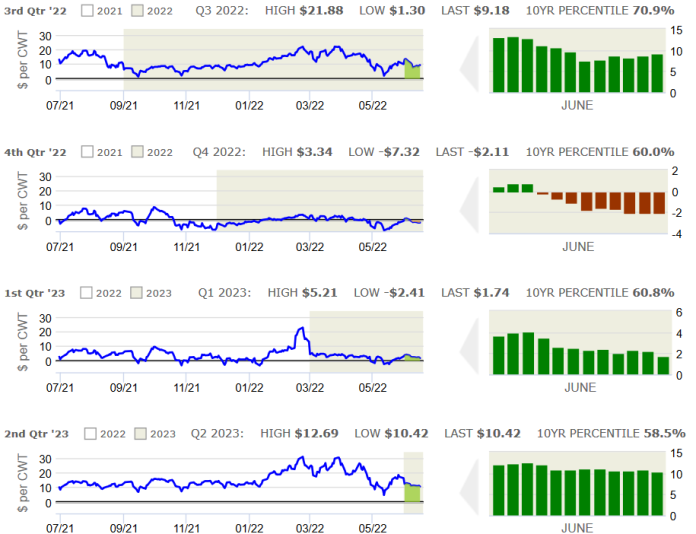 Hog Margin Watch: June Margins weakened over the first half of June as hog prices moved lower while feed costs were mixed with steady meal and higher corn prices. Despite the weaker trend in Lean Hog futures prices, near-term trends for both supply and demand remain supportive. Based on the latest USDA ERS data, retail pork prices reached another record in May at $4.89/lb., down slightly from April but up $0.50/lb. or 11.5% above a year ago. May was the third consecutive month that retail pork prices achieved record levels as inflation trends escalate. Bacon recorded its second-highest price ever during May at $7.36/lb. just behind April’s record at $7.42/lb. while boneless hams set a new recordat $5.17/lb. during May, up 5.4% from last year. Hog slaughter last week according to USDA was 2.372 million head, with the current week’s slaughter estimated at 2.35 million head which would be down 3.5% from last year. Hog slaughter seasonally declines in June and July, and based upon the March inventory report, slaughter should be down 1.0-1.5% from last year over the next 4-6 weeks. USDA will update their quarterly inventory report later this month on June 29. While hog weights also seasonally decline this year, the trend has been different for producer-owned pigs versus packer-owned hogs that now account for 40% of total supply. For the week ending June 10, the average weight of producer-owned barrows and gilts was 212.8 pounds, up 0.5% from last year while for packer-owned animals the figure was 222 pounds, 2.9% higher than a year ago. Our clients continue to target levels to add margin protection in forward production periods with flexible strategies that will allow for further margin improvement over time.