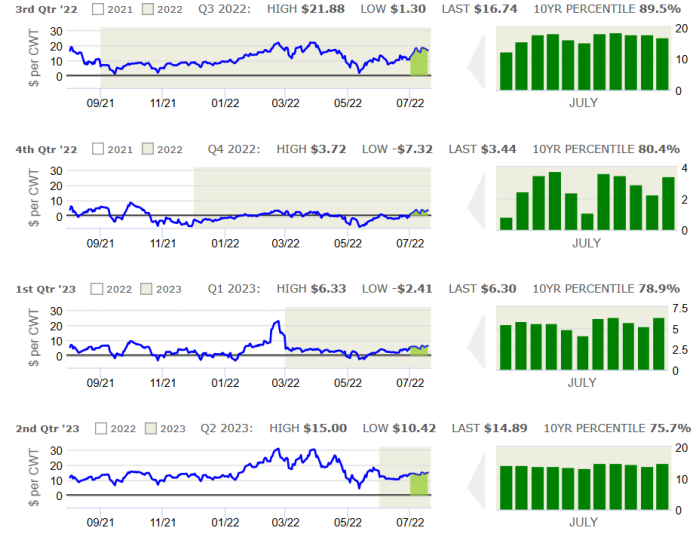 Margins surged over the first half of July as hog futures rallied while projected feed costs mostly trended sideways since the end of June. Hog futures are being supported by strength in the pork cutout which was up $7.51/cwt. this past week, led by a $19 advance in the belly primal. USDA National negotiated cash hog prices have also been firm as producers remain current and packers have had to bid up for available supplies. For the five business days ending July 11, the average dressed carcass weight of producer-owned barrows and gilts was 208.4 pounds, down 4.7 pounds or 2.2% since early June. Producer-owned hog weights are also 9.5 pounds lower than packer- owned hogs, which while down from earlier this spring is still on the high end of the 10-year range. The latest inflation data for the month of June showed the broader food index 10.4% higher than the previous year and the biggest year-over-year gain since February 1981. Inflation at the grocery store was 12.2% higher than last year while food consumed away from home was up 7.7% from 2021. Retail pork inflation for June was up 9% from a year ago with inflation for breakfast sausage up 13.6% while pork chop inflation rose 4.2%. Consumers appear to be shifting to cheaper proteins with soaring inflation as hot dog prices were up 16.3% from last year as buyers shift down to less expensive alternatives. ERS monthly export data showed pork exports for May down 136 million pounds or 19.9% from last year with gainsto Mexico of 16.3% more than offset by reductions to all other destinations, particularly China. Our clients continue to target levels to add margin protection in forward production periods with flexible strategies that will allow for further margin improvement over time.