Margins continued to decline over the second half of October as ongoing weakness in hog prices combined with strength in feed markets to negatively impact forward profitability. Softness in the cash market has weighed on CME hog futures as increased slaughter runs and heavier hog weights are applying pressure. There is growing concern also over potential labor shortages that could impact packer capacity in the upcoming winter period when it will be most needed. A recent slowdown in pork export sales and shipments to China has also been noted which is raising concern. While this has in part been made up by increases to other destinations such as Mexico and Japan, exports have become an increasingly integral part of the pork demand picture and will likely continue accounting for some 25-26% of total U.S. production in the next few years. USDA released the Cold Storage report with pork inventories at the end of September totaling 466.4 million pounds, up 0.2% from last year but still well below the five-year average of around 600 million pounds. Pork bellies continue to be well below typical levels with September stocks of 13.0 million pounds down 47.5% from last year while total loins were down 27.0% to 29.9 million pounds. Total hams increased 32.5% to 193.5 million pounds although boneless hams were only up 4.6% from last year while bone-in hams increased 71.0%,highlighting the difficult labor situation facing the industry with further processing. Corn prices meanwhile are starting to respond to strong spot demand from the ethanol sector with industry margins at multi-year highs while concerns over the presence of La Nina in South America and high fertilizer prices here in the U.S. raising risk premium further out on the curve. Our clients continuing to look for opportunities to add margin protection in deferred periods while evaluating adjustments on existing positions. 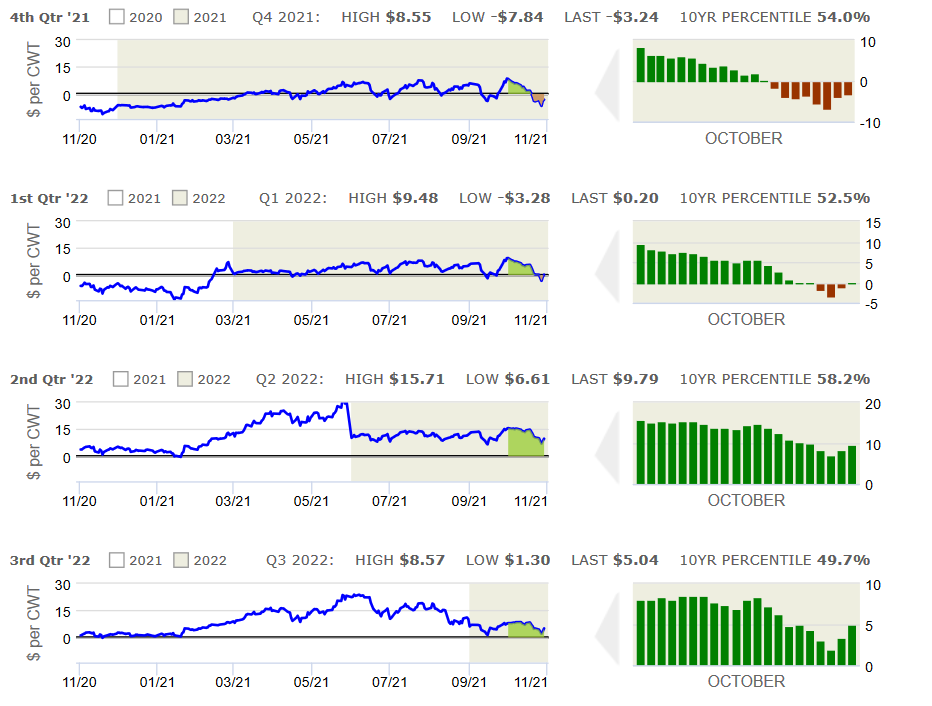