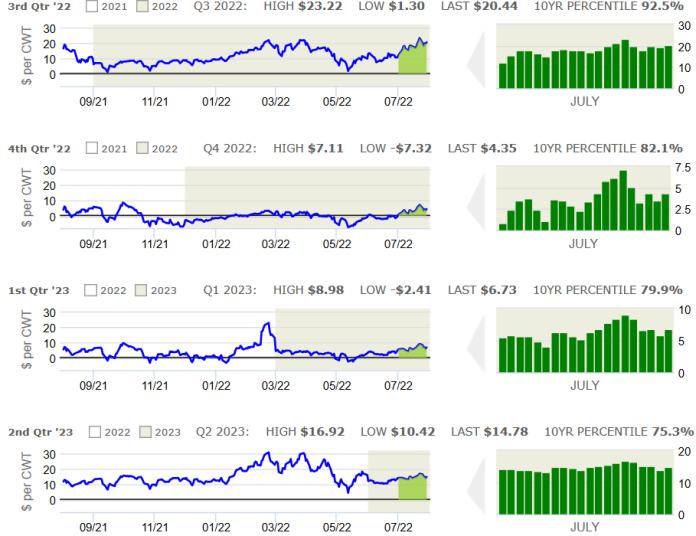 Margins continued to strengthen over the second half of July as hog futures added to their recent advance while projected feed costs were steady to slightly higher. The cash hog and pork cutout markets have been supported by seasonally declining hog slaughter in recentweeks. Hog slaughter has averaged 2.277 million head/week over the past three weeks, 1.4% below last year and more than the 0.7% decline that would have been expected based on the June inventory data in the last Quarterly Hog report. Weather will be watched closely for hog performance in the coming weeks to determine total pork production and how current producers are with their marketings. USDA reported the total inventory of pork in Cold Storage at the end of June at 541 million pounds, up 22.4% from a year ago and 2.4% higher than the five-year average. Pork inventories declined 0.9% during June which was much slower than the typical 4.6% decline on average over the past five years. Belly inventories of 53.2 million pounds were up 46.2% from a year ago and 19.7% higher than the five-year average. Belly inventories declined 6% during June when on average inventories have declined 12% over the past five years. Ham inventories of 139.2 million pounds were 6.6% higher than last year but 7.1% below the five-year average. The corn market has been supported by recent near-term forecasts calling for above-average temperatures and below-normal rainfall across the Corn Belt as crop conditions have been declining and 68% of the U.S. is still under some degree of drought. Our clients have been adding new coverage recently with improved margins using flexible strategies that will allow for further margin improvement over time.