Margins weakened over the first half of August as hog prices slid while feed markets advanced. Strength in the pork cutout continues to support CME Lean Hog futures although concerns linger in the market with ASF now confirmed in the Dominican Republic while U.S. Custom and Border Patrol authorities remain on high alert for the possibility of the disease reaching Puerto Rico which is a U.S. territory. There is uncertainty over how foreign buyers of U.S. pork would react to such a development, and the market will become increasingly dependent on a strong export book moving into autumn when hog slaughter and pork production seasonally increase. About 25% of total U.S. pork production is consumed by the export market, and much of that product may have to be significantly discounted if it had to be cleared in the domestic market. U.S. pork export sales for the week ending August 5 totaled 14,571 MT, down from 38,754 MT the previous week and the lowest since
July 8. The advancing Delta variant of Covid-19 also poses a risk as spread mitigation efforts may limit domestic demand as well as impact labor markets for pork processing. On Friday, the pork cutout closed at $125.68/cwt., largely due to a $22 increase in the value of the ham primal which continues to exhibit heightened volatility in pricing between bone-in and boneless product. USDA released the August WASDE report which showed a larger than expected decline in average corn yields to 174.6 bushels/acre, down 4.9 bushels from July and substantially below the average 2-bushel decline expected. Soybean yields were similarly reduced to 50.0 bushels/acre although generally within expectations. Our clients have benefited by maintaining strong feed coverage while allowing for flexibility for further margin improvement over time. 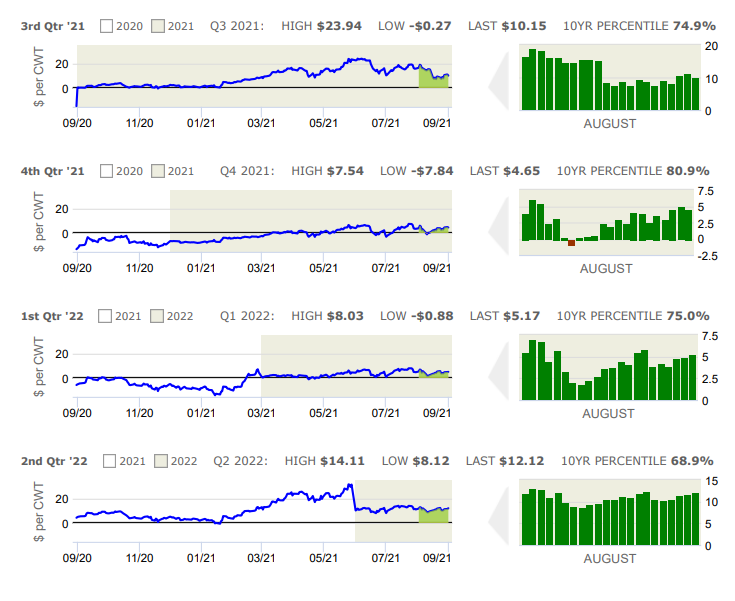