The role of Chromium (Cr) in humans and livestock has been studied over the last five decades, but its supplementation in swine diets is relatively new. This essential trace mineral has a significant impact on glucose metabolism by facilitating the binding of insulin to its receptors on the cell surface, leading to greater glucose utilization (NRC, 2012; Pechova and Pavlata, 2007).

The result of applying Cr in pig diets has been a topic of interest in the swine industry. For example, many studies have reported the effects of Cr supplementation on the performance of weaned and grow-finish pigs (Lindemann and Lu, 2019; Wang et al., 2004; Matthews et al., 2003).

Researchers have also been interested in its effects on sows, since their reproductive performance can have a large impact on the entire production system. Lindemann and Lu (2019) pointed out that sows are highly susceptible to glucose control issues, since gestating sows are subject to gestational diabetes. In addition, Iskra et al. (2016) explains that frequent farrowing causes a decrease of Cr in the sow, so after the birth of the piglets, sows need some time to recover from that physiological stress before Cr concentrations return to normal. With this in mind, there is great potential for improving sow performance when they are fed supplemental Cr.

Chromium is available on the market in both inorganic and organic forms. Inorganic Cr absorption is low, ranging between 0.4% and 2.0%, while organic Cr can be absorbed at a rate of up to ten times greater than inorganic sources (Pechova and Pavlata, 2007). The pig’s ability to absorb dietary Cr is also dependent on Cr source. However, other ingredients – such as amino acids, ascorbic acid, high carbohydrate levels, oxalate, and aspirin – tend to enhance the absorption of dietary Cr (Pechova and Pavlata, 2007; Hunt and Stoecker, 1996).

Sow diets typically contain a significant amount of Cr, although bioavailability is usually low. In these diets, organic sources of Cr, such as chromium tripicolinate (CrTp), are more bioavailable and are more readily utilized than inorganic Cr sources. According to the Food and Drug Administration (FDA), Cr can be added to swine diets up to 200 ppb in complete feed. 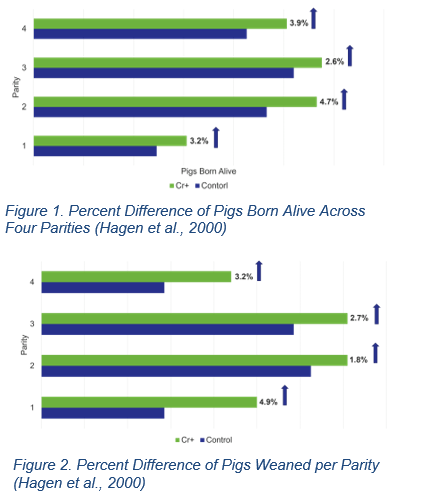 Studies have shown that CrTp supplementation improves breeding performance. Under commercial conditions, Hagen et al. (2000) evaluated twelve 4,000-sow units with the same general management and served by the same feed mill. In the study, breeding, gestating, and lactating sows were supplemented with CrTp to provide 200 ppb of additional Cr to the diets. When compared with the control group (no supplementation), the added dietary CrP improved the number of pigs born alive per litter by 0.37 (P = 0.02) and pigs weaned per litter by 0.33 (P ≥ 0.02). Additionally, the authors expect sow productivity to increase by 0.7-0.9 pigs per sow per year with CrP supplementation in herds that are practicing early weaning. Hagen et al. (2000) also showed the number of sows bred by seven days tended to be higher with CrTp supplementation (90.58%) when compared with the control group (87.83%) (P = 0.09). Although not significant (P = 0.11), sow death rate was numerically lower in the supplemented group vs. the control (9.38% and 10.95%, respectively). Additionally, Campbell (1996) reported the use of Cr picolinate in breeding herd diets would improve sow productivity by 0.4-1.0 pigs per sow per year.

In addition to recognizing the benefits of Cr, researchers have focused on understanding the mechanisms behind how this process occurs within the animal. The reported increase in litter size is associated with the influence of insulin and glucose on the nutritional status and reproductive hormones of sows before breeding (Wang et al., 2004; Lindemann et al., 2004; Lindemann & Lu 2019). Garcia et al. (1997) evaluated the effect of CrTp on tissue sensitivity to insulin in pregnant gilts and found that oxytocin and progesterone were also affected. In contrast, the effect of Cr on litter size varies with level fed and feeding duration, but it is generally consistent with an improvement in sow prolificacy.

In conclusion, the benefits of using CrTp in sow diets have been proven. Adding CrTp to the diet can lead to more pigs per litter, more pigs weaned, and a higher percentage of sows bred. The swine producer can benefit from its use, resulting in more animals to market and increased profits.

Campbell, R. G. (1996). The effects of chromium picolinate on the fertility and fecundity of sows under commercial conditions. Proc of the 16th Annual Prince Feed Ingredient Conference, Quincy, IL (Abstract).