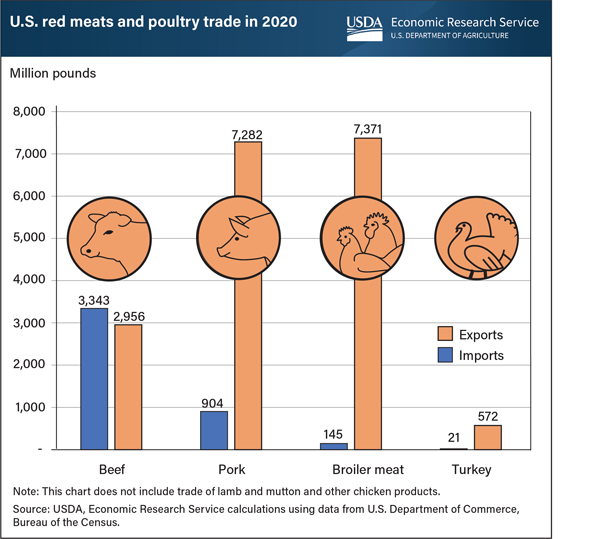 The United States is the world’s largest producer of poultry and beef and the third-largest pork producer.

By volume, broiler meat (broilers are a subset of chickens) was the most traded U.S. meat in 2020. Exports of broiler meat accounted for 92 percent of total poultry (total chicken plus turkey) exports and exceeded imports by almost fiftyfold.

Pork exports further contributed toward the growth in the meat trade surplus. In 2020, pork exports were sevenfold higher than pork imports, increasing more than 15 percent, or almost 1 billion pounds from a year earlier. In contrast, apart from 2018, the amount of beef imported by the United States has exceeded exports 7 of the last 8 years.

Last year, U.S. beef exports declined more than 2 percent from a year ago, while beef imports rose more than 9 percent over the same period. This trade deficit reflects, in part, a robust U.S. demand for processing-grade beef. Turkey imports were up 72 percent and turkey exports were down 11 percent in 2020, with export levels resulting in a trade surplus for turkey. This chart is drawn from the USDA, Economic Research Service’s April 2021 Livestock, Dairy, and Poultry Outlook.

Scaling Up: The weighty impact of hog farming’s evolution?