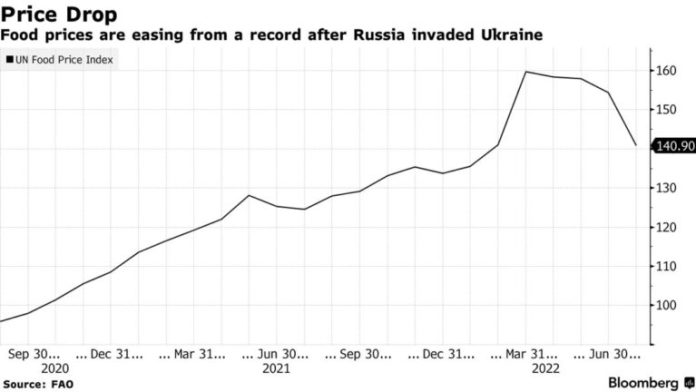 Bloomberg writer Aine Quinn reported today that, “Global food prices fell the most since 2008 after concerns over supplies of grains and vegetable oils eased as Ukraine moved toward restarting exports.

“A United Nations index of world food costs plunged almost 9% in July. The index fell to the lowest since January, before Russia’s blockade of ports in Ukraine — a major food exporter — pushed up food costs to a record.

“The UN index fell for a fourth month, offering some relief to consumers facing a deepening cost-of-living crisis that spans everything from energy to transport. Still, prices remain elevated, putting pressure on households while global hunger is worsening.”

Also today, Reuters writer Maytaal Angel reported that, “The July index was still 13.1% higher than a year earlier, pushed up by the impact of the invasion of Ukraine, adverse weather and high production and transport costs.

And Dow Jones writer Yusuf Khan reported today that, “Much of July’s fall was led by falling prices for cereals which averaged 147.3 points, a decline of 11.5% from June’s figure, but still up 17% from a year earlier.

“‘Leading the decline, world wheat prices fell by as much as 14.5% in July, partly in reaction to the agreement reached between Ukraine and the Russian Federation to unblock Ukraine’s main Black Sea ports, indicating the imminent resumption of grain exports from Ukraine,’ the UN body said. Wheat prices were still 25% higher than a year ago.

Meanwhile, Bloomberg writers David Marino and Ann Koh reported yesterday that, “Three more grain ships are expected to leave Ukraine’s ports as the country tries to ramp up exports of food that have been blocked since the start of Russia’s invasion almost half a year earlier.

It is expected that cargo ships Navi star, Rojen & Polarnet will left 🇺🇦 ports this very morning. The formation of caravan starts at 5AM after what 🛳🚢⛴ escorting by leading ship will sail to its final destination. pic.twitter.com/a6VqkgGFTP

The Marino and Koh explained that,

Reuters News reported today that, “The Turkish Defence Ministry said on Twitter the Panama-flagged Navistar, carrying 33,000 tonnes of corn and going from Ukraine to Ireland, departed from Odesa Port. The ship will be inspected by the Joint Coordination Centre to the north of Istanbul.”

New York Times writers Farnaz Fassihi and Sophie Downes reported today that, “Many potential hazards lie ahead, but the safe passage of the Razoni offered has hope that the long-negotiated deal will fulfill its aim of helping address — though not by itself resolving — global food shortages and high grain prices.

“A fourth ship, the Fulmar S, now anchored near Istanbul, was awaiting inspection to be cleared to travel to the Ukrainian port of Chornomorsk, officials from the joint center said on Thursday.”

Elsewhere, Matthew Luxmoore and Will Horner reported in today’s Wall Street Journal that, “Ukraine said its first grain shipment since the start of Russia’s invasion had been a success and could lead to a surge in exports to prewar levels within two months, but industry players warned that sizable hurdles remain.

“Mr. Kubrakov said Ukraine could return to exports of 3 million metric tons of grain a month by mid-to-late September, bringing about $1 billion into an economy decimated by Russia’s invasion.”

Today’s article also pointed out that, “While the start of shipments is promising for Ukrainian farmers and the country’s mainly developing-world buyers, the flow of corn, wheat and barley will still be lower than before the war. It will take months to clear the backlog of grain, and this season’s harvests are already coming into overcrowded storage, even if the new crop is expected to be depleted by the war. The U.S. Agriculture Department predicts Ukraine will export 30.6 million metric tons of grains and seeds over the 2022-23 season, almost half the tonnage of the season before.”

Also today, Reuters writer Pavel Polityuk reported that, “Ukrainian farmers have threshed 17.5 million tonnes of the 2022 grain harvest so far with the average yield of 3.64 tonnes per hectare, Ukrainian grain traders union UGA and the agriculture ministry said on Friday.

In other agricultural production news, Bloomberg writers Aine Quinn, Vivian Iroanya, and Irina Vilcu reported earlier this week that, “Searing temperatures are shriveling corn crops across Europe, in the latest sign of a deepening crisis that spans everything from Rhine River transport to Spanish olive growers.

“Sown in the spring, corn is under stress due to a lack of rain as the region struggles with rolling heat waves. Three-quarters of Romania, Europe’s biggest producer, is affected by drought of varying severity, while major grower France had its driest July on record. Farmers in parts of eastern Germany could lose their entire crop.”

The Bloomberg writers added that, “The European Union has cut its forecast for this season’s corn harvest to 65.8 million tons, which would be the smallest since 2018-19. That could be revised down further as conditions deteriorate in France and other countries.”