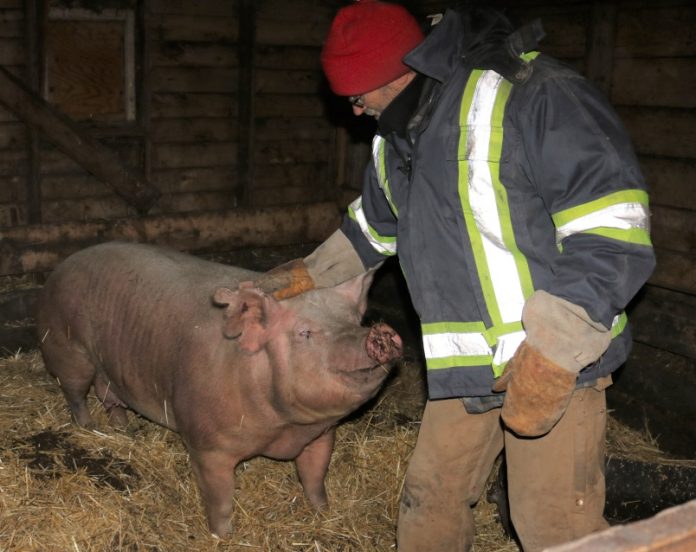 Lacombe pigs are rather unique among a myriad of swine breeds.

To begin with it is the only breed developed in Canada.

And, that brings us to Robert Somogyi who operates a small farm southwest of Willowbrook, SK.

On that farm Somogyi is one of a small group across Canada raising Lacombes in hopes of saving the breed.

“We got into them about three years ago,” said Somogyi during a recent visit to his farm by Yorkton This Week. “The Heritage (Breeds) Society of Canada found them. We got them out of Alberta.”

Initially Somogyi was to get two females and a boar, but was asked to look after two additional females while a home was found for them.

“They never found another home so they stayed here,” he said.

So what are Lacombe pigs exactly?

The breed wasdeveloped in 1947 in Lacombe Alberta, hence the name, explained www.heritagelivestock.net

Lacombes were developed crossing Berkshire sows to boars of Danish Landrace and Chester White ancestry. The foundation stock was top Berkshire sows obtained in Canada which were mated to Landrace-Chester White crossbred boars secured from the United States Department of Agriculture.

The breeding program that founded the breed was conducted at the Canadian Department of Agriculture Research Station at Lacombe, details www.thepigsite.com

“Starting in 1947, twelve years of selective breeding and testing included 258 sires and 840 dams – all highly selected for performance,” notes the site. “All Lacombes that entered the herd after 1954 were backcrossed with purebred Berkshires and those that produced any pigs with black hair were discarded. This insured genetic purity for the white colour, because in swine, the white colour is dominant to black. From 1954-57, Lacombes were evaluated in 60 commercial Yorkshire herds in Alberta and proved to have the performance, capabilities and meat qualities that were sought.”

So, the Lacombe was unveiled to pork producers in 1957. They quickly grew to be a popular breed. 1,743 were registered in 1981, of which 648 were boars and 1,095 were females, states www.heritagelivestock.net.

“The Lacombe is a white, medium-sized pig with a docile temperament. It has large, drooping ears, is long bodied and rather short of leg, and is quite meaty in conformation.

“The breed has been specially selected and noted for its rapidity of gain and docility, especially the sows. Much attention has been paid to litter size, weaning weight, growth rate, the efficiency of feed conversion, carcass quality, and physical soundness.”

Today, only scant remnants of the breed remain, with a few producers trying to keep it alive. The few sows Somogyi has are an example.

Somogyi likes the Lacombes he has.

That all said there are challenges raising a rare breed. To find a new boar Somogyi had to go to Ontario, the animal arriving sight unseen.

“We talked on the phone for 45-minutes,” said Somogyi, adding he recalls he was driving to his brother’s and had to pull over for the extended conversation.

The boar comes from Horizon Hog Farm at Lancaster, ON.

Somogyi said a truck was found that delivers west and the boar was loaded and sent his way. The truck brought it only part way though.

“I went to Brandon and picked him up,” he said.

There is an option to use artificial insemination, there are vials in storage in Alberta.

“It’s something in the future I might look at,” said Somogyi, adding it is only available for breeding females which have had a litter. A first-time gilt is too big a risk of not becoming bred given the rarity of semen.

So what does Somogyi do with his stock?

Some have gone out as weanlings to be raised for meat.

Others are sold for butcher.

And, moving forward a few of the best females will be kept, as Somogyi said his plan is to “have at least six (sows).”

Others have been and will be sold to others for breeding stock; something he sees as having more potential with the new boar in the mix.