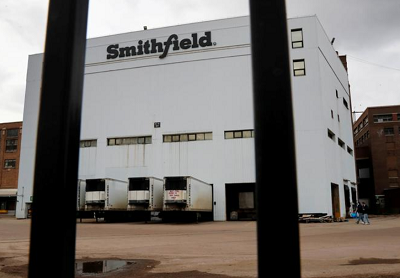 The widow of a Smithfield Foods’ employee who died of COVID-19 is appealing South Dakota’s decision to deny her worker’s compensation benefits related to his death.

Lawyers for Karen Franken on Monday argued in a Minnehaha County courtroom that Craig Franken’s death on April 19, 2020, came about because of his work at Smithfield’s Sioux Falls, S.D. plant, the Argus Leader reported.

“This was a hotbed of Smithfield’s making and created this increased risk of hazardous exposure and infection,” Bram Weidenaar, her attorney, was quoted as saying.

The Smithfield pork processing plant in Sioux Falls at the time was the scene of one of the largest outbreaks of the virus. The plant paused production in April 2020 after more than 500 workers tested positive for COVID. Franken and three other employees died of complications from the virus.

The South Dakota Department of Labor and Regulation in June dismissed the request for benefits from Karen Franken, citing a state law enacted by the state legislature last year. It stated that workers could not sue for workers compensation when related to COVID-19 unless the exposure was intentional.

The judge hearing the case said he hoped to make a ruling in the appeal before the end of the weekend, the Argus Leader reported.

Cited by the Occupational Health and Safety Administration for failing to protect workers from coronavirus hazards at the Sioux Falls facility, the company’s November 2021 settlement with the agency established no wrongdoing on the company’s part, according to Smithfield.

Smithfield did agree to pay a $13,494 penalty and set up an infectious disease preparedness plan for its 46 processing facilities in 32 states.