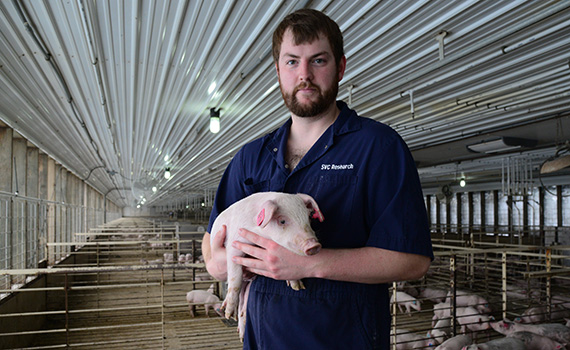 The virus has been identified as PRRS 1-4-4 and, to date, is the most virulent PRRS variant to infect hogs in the US.

“More herds have gotten infected, and this PRRS strain seems to be extremely pathogenic and more prone to airborne transmission,” Johnson said.

When it affects grow-finish units, he recommends immediate and aggressive treatment to reduce mortalities.

“When you walk into a PRRS 1-4-4 outbreak, you see a lot of pigs with varying degrees of respiratory challenge,” Johnson explained. Often, he sees pigs “thumping,” where the animals labor to breathe through airways blocked by bacterial and viral pneumonias.

“Other times, pigs are very, very lethargic because PRRS attacks and disables the whole immune system in pigs,” he said.

An outbreak can be identified early if grow-finish units are tracking water consumption. Pigs will quit drinking first, causing a dramatic drop-off in water usage. This should signal the need to start intensive pig care immediately, Johnson noted.

These symptoms may affect 5% to 25% of the pigs, depending on where they are in the disease challenge.

Johnson’s first action is to gather samples and send them to a diagnostic lab. The PRRS virus strain needs to be verified, and secondary bacterial infections identified.

“Get good bacteriology and susceptibility information from the lab, so you can make better microbial decisions and have confidence that you are putting the right medication for the right bug and utilize it appropriately,” he said. “It’s also good, judicious antibiotic use.”

At the same time, he wants to be aggressive and get help started for ailing pigs. He recommends moving critically ill pigs to sick pens for individual care.

“The best thing to do is provide a warm, dry, comfortable area with less pressure and competition for feed, water and space,” Johnson said. “Pigs can recover and subsequently move back to the general population where they are mixed in with other pigs. Then you can cycle other pigs through that sick pen.”

Another immediate action should be to increase barn temperatures, especially for young pigs. Pigs rarely die from being too warm in the winter during the nursery phase but can die of complications from being too cold.

“A lot of times with these nasty PRRS [outbreaks], you are already behind the eight ball when you start,” he said. “You will never cure viral disease with an antibiotic. You are just trying to suppress secondary bacterial infections and control them when the immune system is devastated and rebooting after going through the PRRS infection.”

Depending on the herd and challenge, Johnson said they will use different antibiotics and delivery methods. He recommends starting water medication right away to address common secondary bugs like Streptococcus Suis, Glasser’s disease, Mycoplasma hyopneumoniae and Pasteurella.

When pigs are unable to get up to drink, Johnson recommends a mass injection followed by oral antibiotics or water medications.

“A lot of focus for me is to make sure we use the right antibiotics and follow up with caregivers to make sure the pigs that need help are moved and getting the necessary care,” he said.

Even with these care regimens, mortalities can still be high. He estimates as much as 15% mortality can occur.

“When you get a virus that is really severe like this and spreads quickly across multiple production systems and geographies, it is a wake-up call to biosecurity practices in grow-finish,” Johnson said.

If any labor or equipment is shared, make sure all parties involved know what is going on. It’s also good to keep the feed mill in the loop as well.

“It’s a hard culture to establish, but if you are able to reduce a break like this, it demonstrates the importance of keeping our barns clean,” he said.