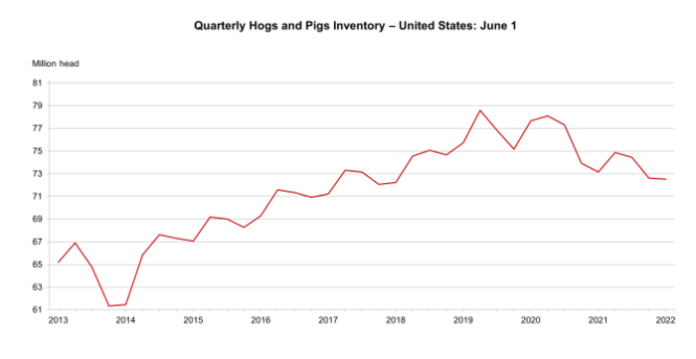 As of June 1, there were 72.5 million hogs and pigs on U.S. farms, down 1% from June 2021 and down slightly from March 1, 2022, according to the Quarterly Hogs and Pigs report published today by the U.S. Department of Agriculture’s National Agricultural Statistics Service (NASS).

Other key findings in the report were:

Between March and May 2022, 32.9 million pigs were weaned on U.S. farms, down 1% from the same time period one year earlier.

From March through May 2022, U.S. hog and pig producers weaned an average of 11 pigs per litter.

To obtain an accurate measurement of the U.S. swine industry, NASS surveyed roughly 4,700 operators across the nation during the first half of June. The data collected were received by electronic data reporting, mail, telephone and through face-to-face interviews.

USDA is an equal opportunity provider, employer, and lender.