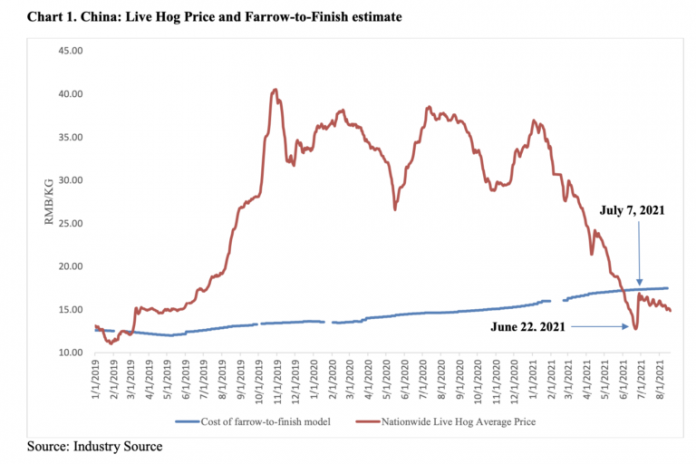 A report on Thursday from the USDA’s Foreign Agricultural Service (FAS) post in Beijing (“Livestock and Products Annual“) stated that, “In 2022, hog production will decline by 5 percent due to low inventories and a smaller sow herd, which resulted from significant slaughter and delayed restocking in 2021. In 2022, government policies will disincentivize small- and medium-scale operations by controlling how quickly pork prices increase. Large, well-capitalized operations will benefit from other subsidy policies. As fewer small- and medium-scale operations remain in the market, the share of hogs produced by large- scale operations will continue to grow.”

Thursday’s update noted that, “Price declines in early to mid-2021 were caused by African Swine Fever (ASF) outbreaks in China’s top three pork producing provinces and resulted in a rush to sell off hogs at all stages of maturity, including underweight, standard weight and overweight hogs. This sell-off occurred during the spring and summer months, a time of seasonally weak demand.

“The low demand and high supply of pork in the market exacerbated the price decline for both hog producers and breeders.”

FAS explained that, “In 2022, a low piglet inventory will support higher piglet prices and return breeding farmers to profitability as demand from large operations builds. In 2021, many piglet producers delayed restocking breeding farms and culled inefficient sows. Due to low piglet prices, producers only partially replaced culled sows with higher quality breeding sows. In 2022, the sow productivity rate will improve due to producer’s inclusion of higher quality sows in breeding farms. However, 2021 delays in restocking of hogs, sows and piglets caused smaller inventories across all stages of China’s hog production.”

Regarding live swine imports, FAS stated that, “In 2022, imports of breeding swine, primarily sows, are expected to decline by 14 percent to 30,000 head. Low pork prices in 2021 and losses for hog operations across the sector will temper optimism for aggressive expansion.”

“The United States, the European Union and the United Kingdom are expected to remain the top three suppliers of breeding swine to China.”

In a look at pork production, FAS stated that,

In 2022, pork production will decline by 14 percent as fewer hogs reach market weight compared to prior years.

“In 2021, the slaughter of a significant number of over-weight hogs boosted pork production and dramatically lowered pork prices during the first half of 2021. In 2022, government price controls will undermine hog and pork production. Consequently, Chinese pork exports will fall 10 percent to 90,000 metric tons (MT).”

With respect to pork imports, last week’s update added that,