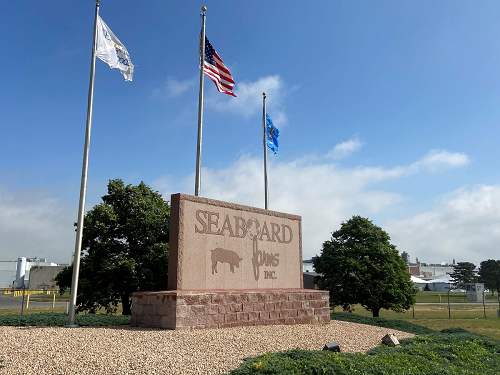 U.S. pork processor Seaboard Foods wants to pursue a 10-1/2-month delay to a federal court decision that would force it to slow the speed of hog slaughtering at a massive Oklahoma pork plant, according to court documents.

The second-biggest U.S. pig producer seeks to intervene in the line speed case after a federal judge ruled against a Trump administration policy allowing pork plants to run slaughter line speeds as fast as they want, as long as they prevent fecal contamination and minimize bacteria.

As the first U.S. pork company to invest in machinery to run line speeds faster under the rule, Seaboard stands to lose from the decision. The Biden administration has sought to emphasize worker safety and is not expected to challenge the court.

A lawsuit brought against the U.S. Department of Agriculture (USDA) by the United Food and Commercial Workers (UFCW) Union had challenged the 2019 rule over concerns about worker safety.

A judge in U.S. District Court in Minnesota invalidated the rule on March 31 but stayed the decision for 90 days to give companies and the Biden administration time to adapt. read more

Seaboard said in court filings on Friday it will need 313 days more to clear out excess hogs from its production process if the company is required to revert to slower processing speeds. read more

“Without a stay of the judgment for 10.5 months, Seaboard faces the loss of thousands upon thousands of animals without compensation,” Seaboard said in filings.

The subsidiary of Seaboard Corp (SEB.A) controls the entire process of pork production from inseminating pigs to transporting meat, and it has developed its system based on the Guymon plant’s ability to run without speed limits, according to the court documents.

Over the course of 10-1/2 months, Seaboard’s production pipeline will produce about 126,000 more hogs than the company can slaughter under the previous speed limit of 1,106 pigs per hour, Stephen Summerlin, senior vice president of operations, said in the documents.

The company, which competes against Tyson Foods (TSN.N) and WH Group’s (0288.HK) Smithfield Foods, has already sold off hogs to reduce its supply since the court decision, according to filings.

The USDA did not immediately respond to a request for comment. A spokesman previously said the agency is reviewing the court decision.

The UFCW union also opposes Seaboard’s attempt to delay the court judgement, lawyer Adam Pulver said in an interview. He called a 10-1/2-month stay “absurdly long” and criticized Seaboard for not addressing worker safety in its court filings.

“Seaboard’s failure to even acknowledge that is mind boggling,” he said.