The digestive tract of the pig has five main parts: the mouth, esophagus, stomach, and small and large intestines (Figure1). The following discussion explains how each part digests nutrients.

The mouth is where food enters the digestive tract and where mechanical breakdown of food begins (Figure 2). The teeth chew and grind food into smaller pieces. Saliva, produced in the mouth, acts to soften and moisten the small food particles. Saliva also contains an enzyme which starts the digestion of starch. The tongue helps by pushing the food toward the esophagus.

The stomach is the next part of the digestive tract (Figure 3). It is a reaction chamber where chemicals are added to the food. Certain cells along the stomach wall secrete hydrochloric acid and enzymes. These chemicals help break down food into small particles of carbohydrates, protein, and fats. Some particles are absorbed from the stomach into the bloodstream. Other particles that the stomach cannot absorb pass on to the small intestine through the pyloric valve.

The small intestine is a complex tube which lies in a spiral, allowing it to fit in a small space (Figure 4). Its wall has many tiny finger-like projections known as villi, which increase the absorptive area of the intestine. The cells along the small intestine’s wall produce enzymes that aid digestion and absorb digested foods.

Digestive juices from the pancreas pass through the pancreatic duct into the small intestine. These secretions contain enzymes that are vital to the digestion of fats, carbohydrates, and proteins.

Most food nutrients are absorbed in the second and third parts of the small intestine, called the jejunum and the ileum. Undigested nutrients and secretions pass on to the large intestine through the ileocecal valve.

A “blind gut” or cecum is located at the beginning of the large intestine (Figure 5). In most animals, the cecum has little function. However in animals such as the horse and rabbit, the cecum is very important in the digestion of fibrous feeds.

The anus is an opening through which undigested food passes out of the body. Food that enters the mouth and is not digested or absorbed as it passes down the digestive tract is excreted through the anus as feces.

This was a general discussion of the digestive tract of the pig. The tract acts to digest and absorb nutrients necessary for maintenance of cells and growth. Efficient absorption of nutrients depends on each segment of the digestive system functioning to its maximum capacity.

Figure 6 gives a summary of the digestive system of the pig. You may wish to test your knowledge by identifying the parts in Figure 7.

Figure 7. Test your knowledge by identifying the parts.

References are listed at the end of this publication. You can get additional information by referring to a farm animal anatomy book.

Duodenum — the first section of the small intestine

Enzymes — substances that speed up chemical reactions within the body

Fats — energy nutrients which supply 2.25 times as much energy as carbohydrates.

Ileocecal Valve — the valve separating the ileum and the cecum

Ileum — the terminal portion of the small intestine

Jejunum — the intermediate or middle portion of the small intestine

Monogastric — having only one stomach (non-ruminant)

Pancreas — a gland which secretes digestive juices necessary for the digestion of fats, carbohydrates, and proteins.

Polygastric — having more than one stomach (ruminants)

Pyloric Valve — the valve separating the stomach and the small intestine

Rectum — the terminal portion of the large intestine

Saliva — a watery, mucoid secretion of the salivary glands in the mouth that lubricates the food and aids in digestion

This document is AS23, one of a series of the Animal Sciences Department, UF/IFAS Extension. Original publication date March 1997. Revised August 2015. Visit the EDIS website at http://edis.ifas.ufl.edu.

The Institute of Food and Agricultural Sciences (IFAS) is an Equal Opportunity Institution authorized to provide research, educational information and other services only to individuals and institutions that function with non-discrimination with respect to race, creed, color, religion, age, disability, sex, sexual orientation, marital status, national origin, political opinions or affiliations. For more information on obtaining other UF/IFAS Extension publications, contact your county’s UF/IFAS Extension office.

Does Your Disinfectant Work In Winter? 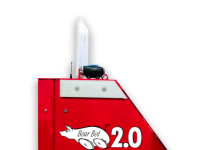 Determining the efficacy and safety of differing caliber/ammunition combinations for the humane euthanization and subsequent mass depopulation of market weight pigs.