However, this year’s holiday sales was very weak. With coronavirus in mind, Central Government encouraged people to stay where they were to celebrate the holiday, and not to do the annual ritual at their hometown. Local governments turned guidelines into rules restricting migrant workers from coming home. As a result of travel restrictions and social distancing practices, pork sales plummeted and price fell. February cash hog price of 30.2 was 21% lower than year-ago level. 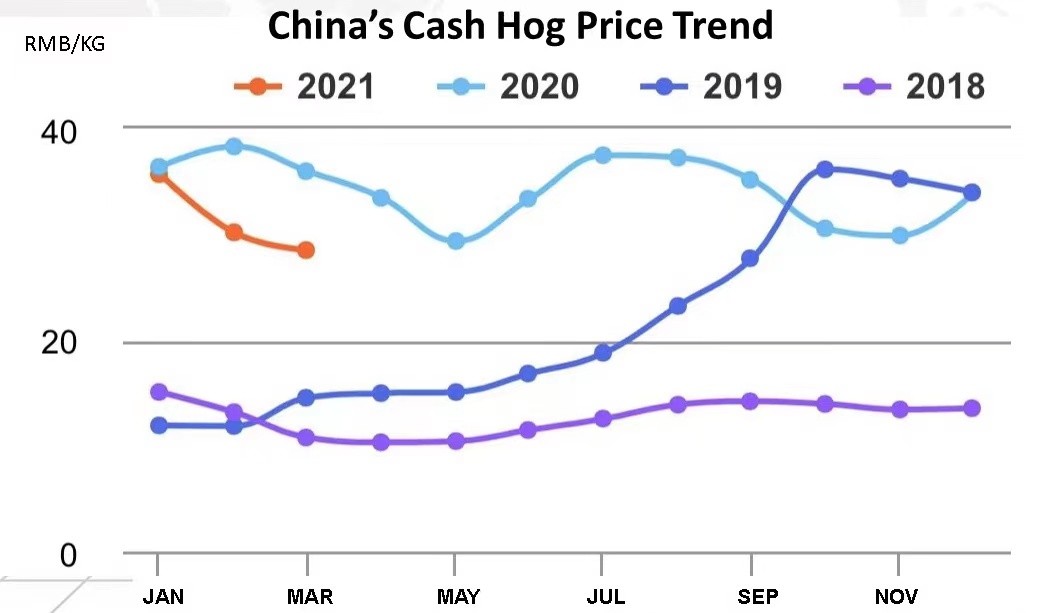 Immediately following CNY is the trough season in cash hog market. Chinese consumers need a break from heavy meat diet during the holiday and switch to a lighter fare in the spring. Slaughterhouses and meatpackers cut back buying from hog farmers. Another factor is money. The biggest annual spending season drained the wallet of many consumers. They now need to work hard and spend less. Current cash hog price of 26.5 is 12% under February level, and 26% below March 2020 average.

Weak sales and low price are expected to persist throughout March and April. The next peak season will kick off on May 1, the International Labor Day long weekend. 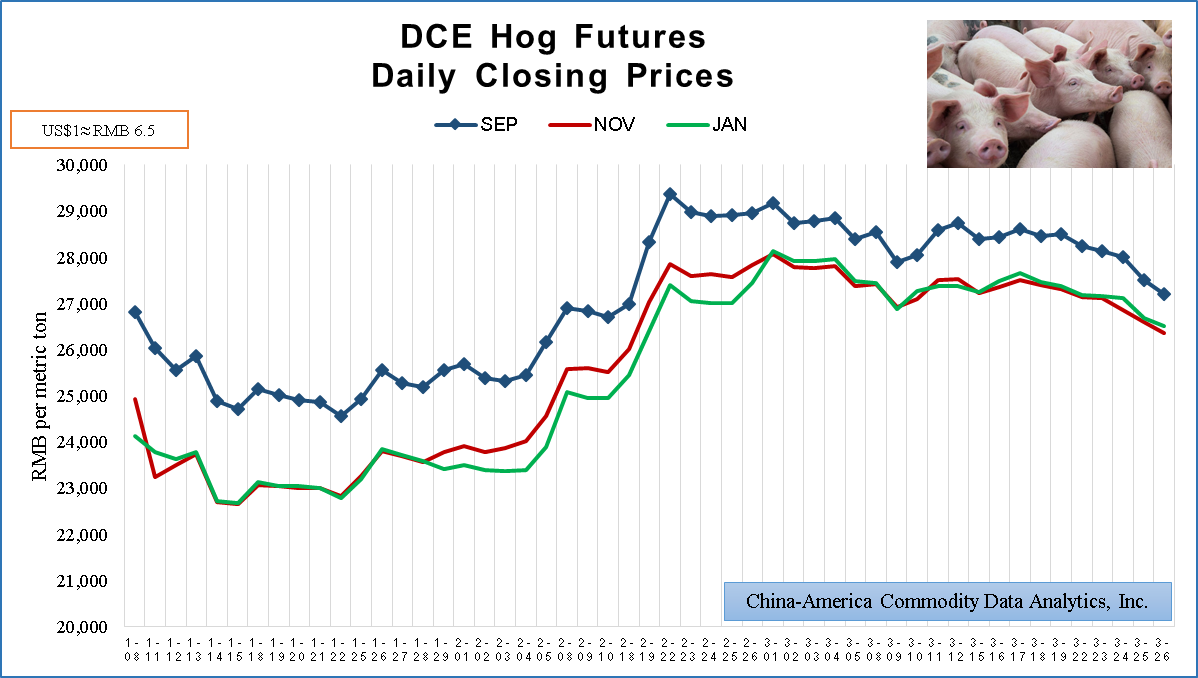 Futures market speculators apparently lost interest in a contract trading at par. Commercial hedging has yet to take hold. Even with recent price drops, large producers still enjoy a sizeable hog margin. They are in the mood of “All-In” for expansion, and have not given risk management a serious thought.

Current State of Hog Industry: According to the Blind Men

Ministry of Agriculture and Rural Affairs recently released sow stock data for February, which logged in the 16th consecutive months of positive growth. February data of 42.476 million was 1.0% above January level, and 42.1% more since African Swine Fever (ASF) reduced the country’s sow inventory to 29.9 million in September 2019.

Contrary to the rosy picture depicted by government officials, sow recovery is only half way through. February sow stock is still 20% below at the pre-ASF level three years ago in February 2018. 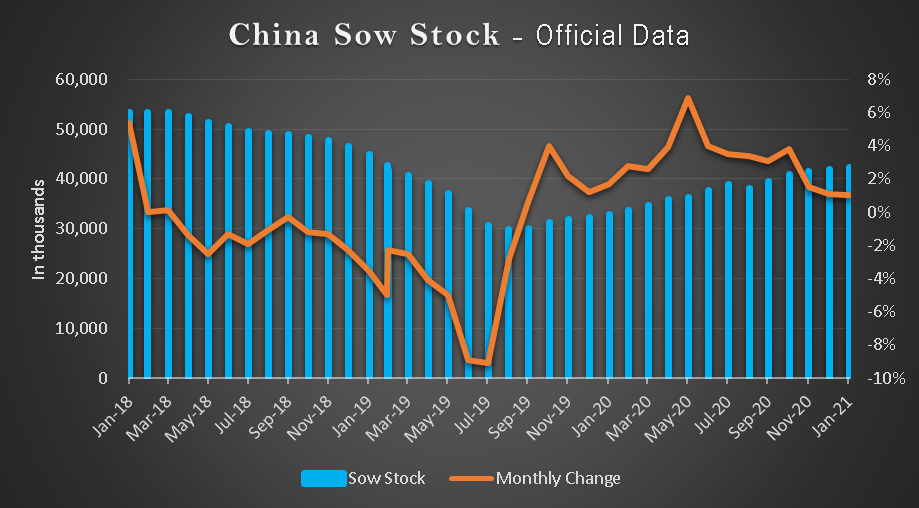 Sow data published by private agencies shows a very different picture. Yongyi Consulting, based in Shandong Province, argued that there was a loss of 4.99% in January, followed by additional decline of 4.68% in February in sow stock nationwide. Resurface of ASF cases and other winter-related diseases are to blame. SCI, another consultancy, showed a larger loss of 5.87% in January, but a rebound of 2.04% in February.

So, whose data is more accurate? After all, a different pace of recovery has significant ramifications not only for the hog industry in China, but pork and oilseed exporters in Americas and Europe, and for commodities markets which price in the data as well.

You are probably familiar with the parable of “The Blind Men and the Elephant”. Each blind man touches a different part of an elephant and comes to his own conclusion of what the elephant is like. The moral is that we like to claim absolute truth based on our subjected experience, and ignore other people’s limited experiences which may also be true.

As of 2018, China has 31.5 million hog farms across 30 provinces in over 2,800 counties. No government or private agency has the ability to survey the entire industry in a timely fashion. They are like the blind men: each tells you the truth but not the whole truth. 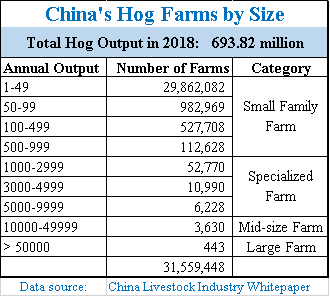 Government agencies have the best vision of them all. Those hog farms mid-size and above are required to report production and inventory data to Ministry of Agriculture monthly. However, official data is not free of political interference, as we are well aware in China. Data from different agencies contradicts each other. Sometimes you could not add up provincial data to arrive at a country total, as the same agency may have different methodologies for provincial branches and at national level. In general, we just need to take it with a grain of salt.

In the last commentary (Large Chinese Producers Booked Record Hog Sales), we reported that 13 publicly traded Chinese hog firms released Jan-Feb performance data. Together, they sold 11.76 million hogs, up 145.59% from the same period in 2020. This giant farms represent 12%-15% of the hog industry, and have a very different trend comparing to small family farms.

Due to the limitation of hog and sow data, we would need to cross-check feed sales data reported by China Feed Industry Association, and slaughter data also reported by Ministry of Agriculture. Unfortunately, each dataset has its own limitation. Only 60% of the hog farms use commercial feed products. And small slaughterhouses are not being tracked and reported. I wish there were an easier way to understand hog data from China. But it takes a trained eye to examine its current state and uncover the whole truth.

China’s Impact on US Pork Markets

On Wednesday, April 7, I will join forces with StoneX Group to bring out a virtual feature presentation, titled “China’s impact on US pork markets”.

For an hour, I will discuss China’s Hog Industry, Impacts of ASF and COVID, DCE Live Hog Futures, Large Hog Firms in the Stock Market, and China Pork Market Outlook for 2021 and beyond. 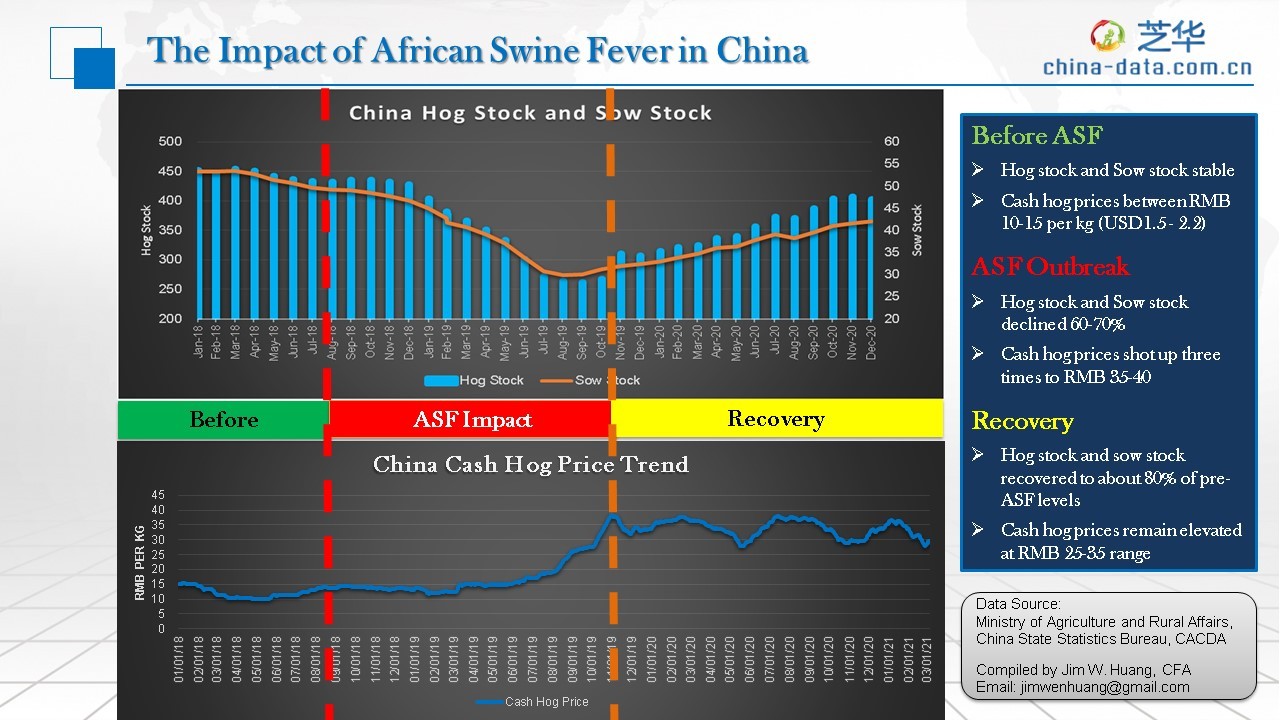 Here is a direct link to the registration site: