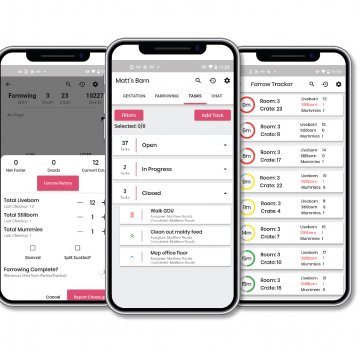 What do a pig farm and a hospital have in common? More than you might think, according to Matthew Rooda. Surrounded by pigs his entire life, the native Iowan has seen firsthand the problems producers face with processes and people. Yet it wasn’t until he became a medication aide at a health care facility that he realized the pork industry lacked the tools necessary to solve those problems.

“More than 550 million pigs die each year. The cost of mortality combined with labor turnover is $418 per sow annually. Today, failure, as well as success, is measured across an entire herd rather than by an individual animal,” says Rooda, CEO and cofounder of SwineTech (swinetechnologies.com). “In a hospital, it’s the difference between only looking at the death count of residents quarterly vs. the way each patient was cared for individually.”

Most mortality losses, he says, are due to a lack of timely care. “They can be mainly attributed to the fact that employees are often blind to what’s most important at any given time, which makes it very difficult to be at the right place at the right time,” Rooda says. “Managers also lack the visibility they need to ensure their teams are meeting, or even exceeding, daily goals and expectations because they are not able to verify whether their people are correctly following the processes in place.”

In the customer discovery phase, they also found that many employees had no idea where the important information they were writing down went or how it was even being used by management. The result – disconnected teams, higher employee turnover, and increased pig mortality rates.

“A lot of the feedback we received taught us that if we want process compliance, we had to figure out how to make the person on the farm feel more valued, understand the ‘why’ better, and feel like his job is better because of PigFlow,” he says. “When you look at it from a health care perspective, nurses use technology to ensure they are following processes and to provide every patient with the care needed. Those tools were lacking in pork production.”

SwineTech’s solution is PigFlow. The intelligent workforce and swine management platform empowers producers to implement, track, and adjust on-farm processes from any place at any time. With PigFlow, everyone knows where they need to be and how they need to respond. Because it also makes managers aware of how well their employees and farm are performing, it enables managers to make more informed decisions.

By optimizing the flow of information, the tool delivers actionable intelligence in a timely manner, so the best outcome is achieved. A record of both the communication and the action are provided to evaluate the effectiveness of personnel, decisions, and processes. Rooda says this is accomplished by following six important steps that drive clarity, action, and results.

“This cycle can be applied to day-to-day processes, on-boarding, and technology implementation. It’s a constant cycle and feedback loop,” Rooda says. “It’s how a producer refines his operation. Once the evaluations and decisions are made, they feed right back into step one. This continual feedback is how we maximize our operations.”

Since January, Hord Family Farms, located in Bucyrus, Ohio, has been using the platform to manage a 5,000-head sow unit. A fifth-generation family farm, the operation strives to raise animals with care and use modern and advanced farming practices to be efficient and sustainable.

“We thought PigFlow would improve our efficiency as well as assist the farm’s leaders in making more timely decisions on how to spread out the work to best help our herd,” says Casey Long, who oversees the sow unit at Hord Family Farms.

The operation and its employees have benefited from the platform in three ways.

• Timely adjustments. “Being able to have a real-time snapshot of the farm from a management standpoint has allowed us to adjust on the fly to better meet the needs of the herd,” Long says.

FarrowTracker is one of Rooda’s favorite features. “People will write down on a card when they check a sow, but that information is never retained,” he says. “FarrowTracker absorbs the information at each checkup and then allows a manager to specify how often a sow should be checked. It also provides a rolling tracker of sows currently giving birth, and how many minutes until they need to be checked again. It’s a great metric to figure out if you’re checking sows on time. As a result, producers have seen improvements in stillborn birth numbers.”

• Enhancing communication. “With the app, each member of our team can chat back and forth at any time,” Long says. “In a matter of days, it enabled a pretty efficient team to become a super-efficient team.”

To date, PigFlow manages nearly 25,000 sows and more than 500,000 piglets in the United States. Farms range from small genetic multiplication sites to large 8,000-sow facilities. These farms operate nearly 10% more efficiently and have reduced stillborn deaths by up to 15%, according to SwineTech.

“It’s clear that paying attention to detail often results in a high return on investment,” Rooda says. “With PigFlow you are in control of your return on investment. For just 50¢ per sow per month, you can take advantage of the many benefits PigFlow has to offer to decrease risk and increase profits.”

“I have been in the pig industry for nearly 15 years,” Long says. “Matt has lived the life and walked in our boots. When we reach out to him, he understands what we are talking about. It makes for a very fluid relationship, and I believe it is what makes SwineTech stand out.”

Podcast: Catching up with Swine Industry Entrepreneur Joel Harris with the Ag Start Up Engine