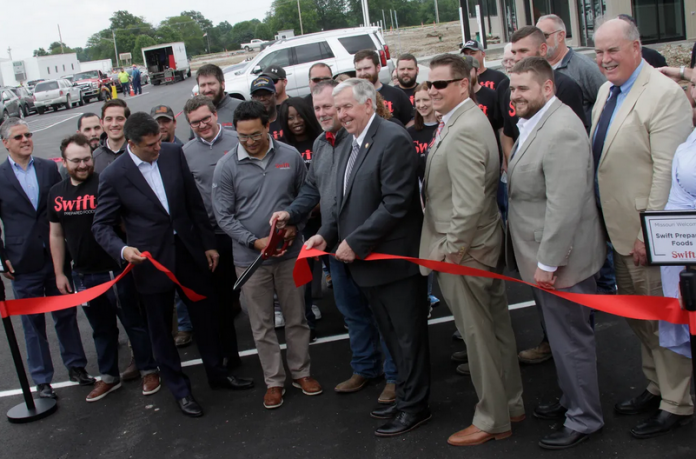 “It is always exciting when companies choose to invest and grow in Missouri,” Governor Parson said. “With the opening of its facility here in Moberly and the recent announcement of its new facility in Columbia, Swift Prepared Foods has shown a commitment to the people of this state. We are proud that Missouri is home to great companies like this one and look forward to working together for many years to come.”

The Moberly facility, located off N. Morley St. and west of Memorial Park Cemetery, will produce ready-to-eat, fully cooked bacon, and it will create at least 250 new jobs in the community.

“When you go into our building you will be greeted by a collage of Swift Prepared Foods that includes the words ‘Building Something Great,’” said Tom Lopez, president and chief operating officer, Swift Prepared Foods. “When we were first here in November, 2019 there was nothing here but a rolling grass field with a mountain of dirt in the middle of it. Now look at it. We have truly built something great here in Moberly and I’m happy to celebrate that.”

Lopez said Moberly’s strategic location, as well as support from the community and state, are key reasons for Swift’s decision to expand in the region.

“This is a great day for Swift Prepared Foods, and we are proud to call Missouri home as we continue to grow our company and create opportunity for our team members,” said Lopez. “This milestone marks our entrance into the region, and we look forward to making Moberly an even better place to live and work.”

With its home office in Chicago, Lopez added that Moberly’s strategic location, as well as support from the community and state, are key reasons for Swift’s decision to expand to mid-Missouri. Other plants are operated in Ottumwa and Council Bluffs, Ia.., Booneville, Miss., Elkhart, Ind., and Swanton, Vermont.

This is the company’s sixth facility in the country, including the first completion of two plant sites within Missouri with the other being roughly 45 miles south of the Magic City in Columbia.

Nearly three weeks ago Swift Prepared Foods began constructing 325,000 square foot plant in Columbia that will employ nearly 250 persons. It will produce Italian meats including salami, pepperoni, prosciutto and pancetta. The Columbia plant location is 80 acres along Paris Road, next to Schneider Electric and 3M and near Kraft Heinz, Aurora Organic Dairy and Quaker.

“This is fantastic. Swift is bringing over 200 good-paying jobs ($16 per hour and higher) to Moberly. This will be a tremendous boost to the local economy and a good partner with the community,” said Missouri 6th District State Representative Ed Lewis of Moberly. “Swift will only move the economic needle in our community in other areas such as improving the tax base for our schools. This is truly a win-win situation for everyone.”

Travis Miller, plant manager of the Moberly operations.said the facility has about 150 persons that have been on the payroll since early April. These employees have been engaged with extensive training, and both cleaning and safety procedures. He also said a little more than 100 persons were hired last week and they will begin their training sessions soon.

“For about the past month we’ve spent a lot of time learning how to run the equipment and the work responsibilities associated with their position, and we have been debugging our line operation,” said Miller, who joined Swift about 18 months ago at its Ottumwa, Ia. facility location. “We’re planning to start next week rolling out our first production of ready-to-eat bacon strips as well as packages of bacon bits. By the end of June we plan to have about 270 employees all on-board, properly trained and ready for us to be in full operation, 24/7, when we come back from the July 4 holiday.”

Miller added that one of his main goals is to ensure Swift becomes a good parter and neighbor in this community.

The company, formerly named Plumrose USA, took its first steps towards this goal last November when a $300,000 gift was handed to the city where monies were shared among the Moberly Parks and Recreation Department to help support the construction of an outdoor amphitheater near the Rothwell Park Riley Pavilion, and a large size water splash pad and restroom facility for public use erected at Tannehill Park. A portion of the funds were also handed to the Randolph Area YMCA for the purpose of helping promote a more healthy lifestyle for persons living in the community.

Although Moberly Area Economic Development Corporation President Michael Bugalski said he did not have numbers available to project the financial impact Swift Prepared Foods will have within Randolph County, he said according to state of Missouri estimates each new manufacturing job such as what Swift offers creates 1.8 new jobs elsewhere in the community.

‘That’s the multiplier effect we’re talking about. We’re calculating the 200-plus jobs times 1.8 because when you think about it the influx affects growth of existing businesses when it comes to things like local retail, construction, healthcare, grocery stores for example that will grow to help keep up with the demand,” Bugalski said. “This is a great day moving forward for our community.”

Parson said Missouri has become a target for CEO of companies are choosing the Show-Me State as its destination to expand and grow their respective businesses in recent years it as reached the top tier in the U.S. for economic recovery. This includes the year 2020 when the COVID pandemic unleashed its havoc upon society, forcing stringent changes to one’s way of life and conducting business.

Parson said there was more than $1 billion in business growth was invested into this state as well as more than 10,000 new jobs created last year. As of Monday Missouri’s unemployment rate is just 4.1% in the state.

He also compared the state’s overall current economy from last year to that of others with the following data to support his claim, saying that Missouri ranks: first in small business wage growth which means Missouri is paying good wages; second for apprenticeships; fourth in new manufacturing facilities; seventh for migration, which means people are wanting to move to Missouri; 10th for new business expansion; 11th for companies to relocate their businesses.

Parson also informed gatherers that 2021 is off to a promising start for the state’s economy. In addition to what Swift Prepared Foods is doing in Moberly and what it will soon provide in Columbia, he cited several large-scale business expansions and new ventures springing to life. This includes; a $62 million Casey’s General Store distribution center in Joplin that will provide 125 new jobs, a $7.2 million John Deere plant in Springfield bringing 132 new jobs, $62 million Carston Construction Material facility that will supply 100 new jobs in Sikeston, and others.

“All of these things are reasons why Missouri is on the right track for economic growth and sustainability,” Parson added. “As I talk to CEOs, business persons across the U.S. and in other countries the main reason they choose to expand or relocate their business operations is they want to look hard at the community’s workforce to learn if it is prepared to support them should they bring their business here. They want to know if people in the community are trainable towards their business. Also, one of the more important things they look at is learning what the community is like for its company when it comes to supporting their employees and their families to see if there are opportunities for growth and development for them.”

Swift is also partnering with Missouri One Start, which will provide the company with workforce recruitment and training assistance tailored to meet their specific needs. The BUILD program, a program that helps companies embark on major investment and job creation expansions, was also used by the company.

“On behalf of the city that we are very thankful for the investment that Swift Prepared Foods has made here. We are here today not only to celebrate a large business that’s bringing more jobs and economic growth, but also a great community partner,” Moberly Mayor Jerry Jeffrey said as he also gave thanks to a number of local and state organizations and businesses having their hand in bringing Swift to Moberly. “This is evidenced with their interest by investing in our parks and recreation department that will only benefit the people of our community.”