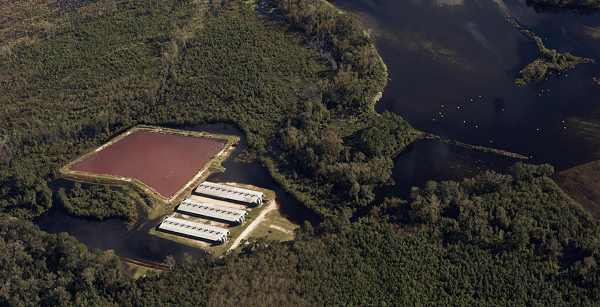 We just challenged four state water permits allowing Smithfield-owned hog operations to use giant pits of untreated hog feces and urine to produce gas while spraying the harmful waste on surrounding areas, continuing a long history of disproportionate water pollution and harm to nearby Black and Brown families.

“Families have been dealing with contaminated water and unbearable odors from Smithfield’s hog operations for decades,” says Maggie Galka, vice chair of Environmental Justice Community Action Network (EJCAN) board. “Smithfield promised neighbors it would clean up its mess, and the law requires it to do so.”

Our lawsuit, filed in the N.C. Office of Administrative Hearings, is on behalf of EJCAN and Cape Fear River Watch.

“The law requires Smithfield to use cleaner technology, and Smithfield is not above the law,” says Attorney Blakely Hildebrand. “Smithfield must do more to stop its pollution and continued environmental injustices rather than clinging to the cheapest, most harmful method possible to handle untreated sewage—collecting it in pits and spraying it onto fields—when cleaner technology is available.”

Ignoring long-standing environmental justice and pollution concerns, the permits issued by the N.C. Department of Environmental Quality entrench a primitive waste lagoon and sprayfield system at each of the Smithfield-owned operations in which untreated sewage waste from thousands of animals will be collected in large pits and sprayed onto neighboring fields.

“The lagoon and sprayfield system is without a doubt one of the biggest threats to the water quality of the Cape Fear Basin,” says Kemp Burdette, the Cape Fear Riverkeeper at Cape Fear River Watch. “Smithfield is doubling down on this polluting system and making our water and air dirtier, when better solutions are available.”

The scoop on our latest biogas actions

The process for trapping methane from the pits of untreated hog feces and urine does not resolve harmful water pollution from the hog operations or foul odors that plague neighbors, and may make these problems worse.

Other technologies address these concerns and have been implemented at other hog operations, but have not been widely adopted by the hog industry.

“We’re asking the court to require DEQ to comply with a law mandating cleaner technology to manage hog waste and to take additional steps to curb water pollution from these industrial hog operations,” explains Hildebrand.