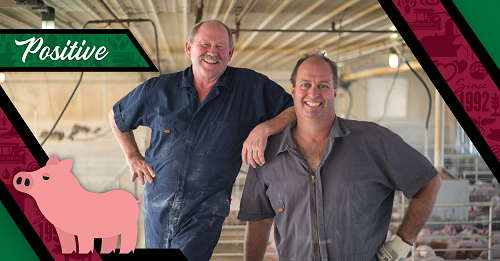 To kick off our series of awesome and uplifting stories on our employees, it only seemed right to start with the most uplifting theme of all — positivity. From the outside looking in, farming can appear messy, dirty, stinky and oftentimes downright hard, but even when the going gets tough, our employees stay positive and their co-workers notice. Over 50 of the nominations we received said what the respondent appreciated most about their co-worker was their positivity.

When describing Jasmine, a newborn pig specialist at Sow 14, one of her co-workers said, “I could count on one hand the number of times I have not seen her in a good mood. Jasmine is the smiles at our farm. She is always in a great mood, always laughing or smiling and keeping everyone’s spirits up.”

And the praise didn’t stop there. Her co-worker continued, saying, “Jasmine is always trying to keep a positive attitude for herself and the crew. She is a pleasure to have around. ”

Travis, the manager at Sow 113, was also given a shout out for his positivity.

“Travis takes lemons and makes them into lemonade. No matter what challenges he is faced with he always has a positive outlook,” said one of his co-workers. “He maintains a fun and positive, team-oriented work atmosphere for his team.”

Challenges will inevitably come your way in any profession, but what matters is how you choose to respond to them. Nowhere does that ring truer than in pork production. Deborah, the farrowing department head at Sow 18, was recognized for her positivity, even in the face of a language barrier.

“She is very hardworking and always has a very positive attitude at work,” said one of her co-workers. She always tries to communicate with those who speak Spanish and is always happy.”

This infectious positive spirit isn’t just found on our farms — it’s in our offices too. Madeline, a member of both the Human Resources and Production Well Being teams was nominated multiple times for her boundless positivity.

“Madeline is such an incredible asset to Iowa Select Farms,” said one of her co-workers. “She is a positive ray of sunshine EVERY SINGLE DAY…even in the middle of the worst thunderstorms! I cannot think of a better representative of Iowa Select Farms and am so lucky to have her on our team!”

We could go on and on sharing all the nominations that mentioned positivity – there were over 40 of them – but this last one about Josh, a newborn pig specialist at Sow 30, says it all.

“Josh is a hard worker and puts animal care first,” said one of his co-workers. “He frequently sings to the sows and brings a positive attitude to the farm daily.”

To our employees who do all they can to spread positivity in their workplaces – even singing to the sows if that’s what it takes – thank you for embodying one of the traits that makes our company and employees awesome.

Roundtable: Emerging E. coli in the nursery – why are we seeing this?