The giant Covid-19 relief bill includes $1,400 stimulus checks to most Americans; unemployment insurance, child tax credit, and assistance for food, rent and mortgages for millions of families; $130 billion budget to reopen schools; $160 billion investment to build national vaccine program and boost testing. There is also aid for state and local governments on pandemic response and provision for business relief for millions of struggling small businesses.

In theory, government spending during economic crisis is considered bullish on commodity prices. Direct stimulus checks are very effective as consumers would use immediately to pay for food, shelter and other necessities. This sets the stage for a bullish market for the hog and pork industry.

It’s my opinion that significant opportunities exist in the cash hog market, hog futures contracts and equity shares of publicly traded hog firms. We will first take a close look at China, which increasingly drives global pork demand, and then interpret its impact on trade and investment.

Last Friday, China’s Ministry of Agriculture and Rural Affairs reported national sow stock of 42.06 million at the end of January, up 1% month over month, and up 35% year over year. January hog stock was 402.19 million, down 1.1% from December but up 53.4% from year-ago level. 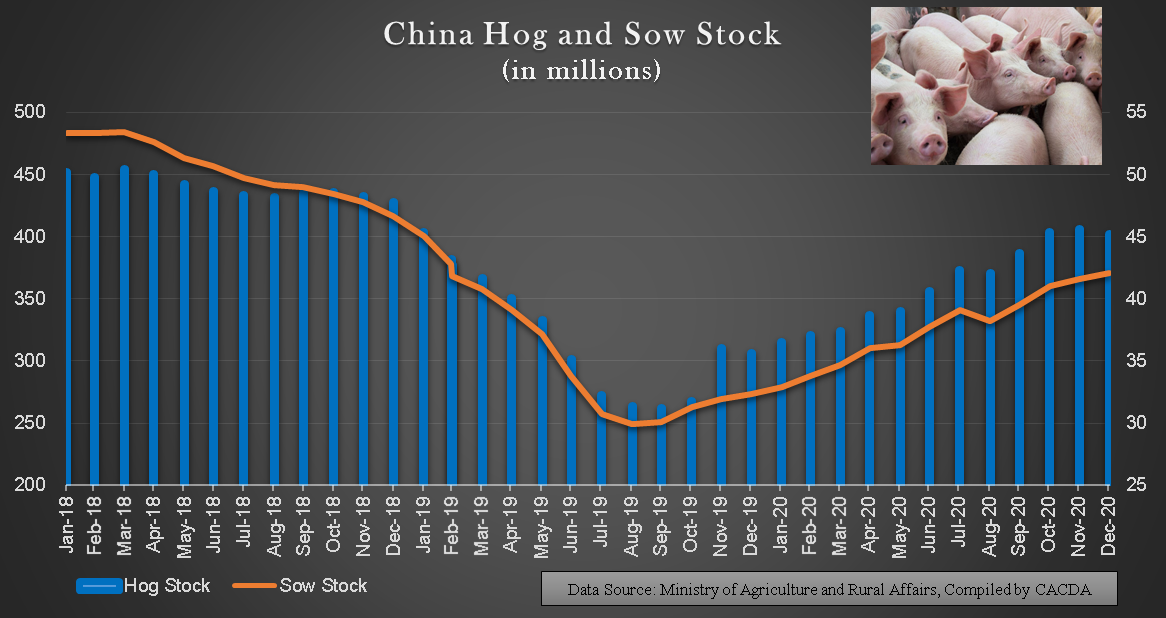 Mr. Xin Guochang, a director of the Agriculture Ministry and spokesperson for the Livestock Division, explained the latest data on China Central Television (CCTV). Sow stock is the most critical performance matrix in hog production. January was the 16th consecutive months where sow inventory logged in a positive growth. If we keep up the 2.1% monthly growth rate seen in last year, by the end of June, sow stock will reach the pre-ASF level in 2017, according to Mr. Xin.

I first met Mr. Xin in 2016 at an Agriculture Ministry meeting. The following year I paid a personal visit to Mr. Xin at his office in the Ministry, and had an insightful discussion on how the government agency collects agricultural data. There is no doubt in my mind that Mr. Xin is an honorable person. However, while the data is valid, it opens to different interpretation and less rosy outlook.

The sudden jump in hog slaughter was triggered by the crushing of cash hog market in January, partially due to the resurface of ASF cases and the resulting panic selling. I predict that February hog stock would continue to decline, and the gains in sow stock would slow down.

Keep in mind that due to sow shortage, many hog farms resolved to retaining market hogs and converting them into sow. This tactic results in lowered sow productivity in terms of PSY as well as breeding lifespan per sow. Counter to the pre-ASF improvement trend, it now takes more sow to produce the same amount of pork.

In 2018, China population was 1.393 billion people. It grew 4.1% to 1.45 billion in 2020, according to Statistics Bureau data. To keep up with population growth, hog production needs to also grow 4.1% from the 2018 level to 56.3 million tons. This assumes that there will be no population growth this year and people are keeping the same diet. My conclusion: Last year’s pork production was 15.2 million tons, or -27% short of the supply-demand equilibrium. This is why, after a record 4.22 million tons of frozen pork import last year, hog and pork prices in China still stay at a very high level.

From trading at a deep discount in January, to now at par with cash hog market, hog futures prices suggest that China’s pork supply shortage is here to stay for the foreseeable future. 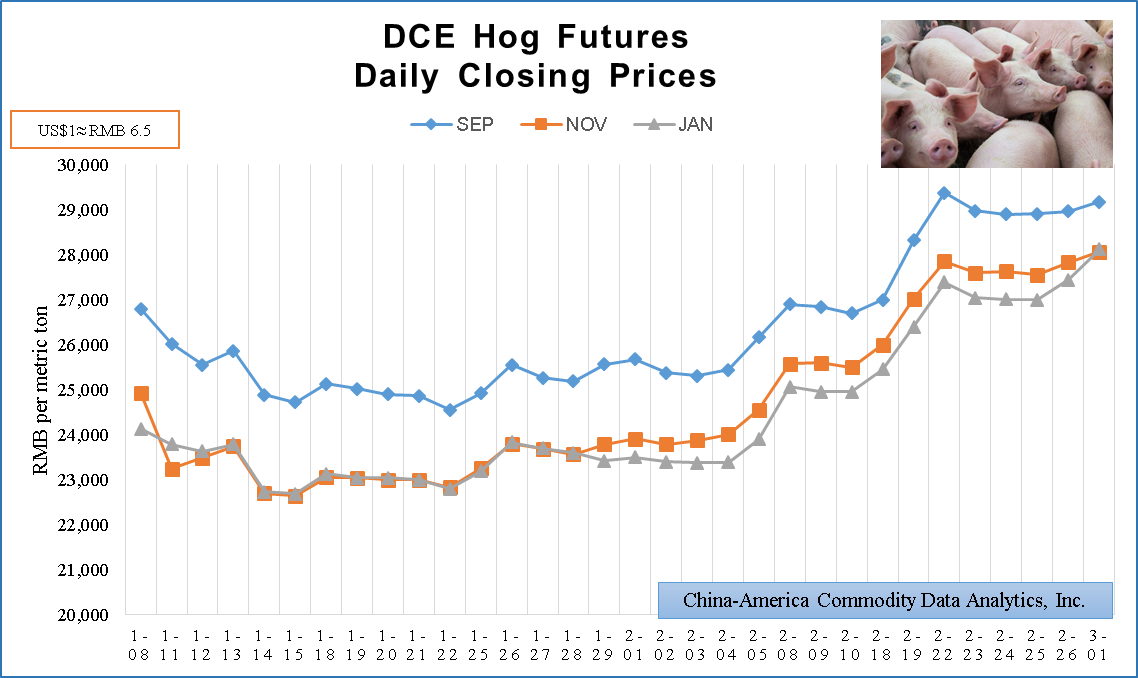 he Takeaways: Where is the Alpha?

Today, cash hog price in China averages RMB 29.47, which is equivalent to US$4.50 per kilogram. According to USDA National Hog and Pork Summary, national average carcass base price in the US is $78.65, which is converted to $1.73 per kilogram. China hog price is 160% higher.

With a huge price spread and a large supply shortage up to 15 million metric tons, bigger than the entire US pork production, selling pork to China is a straight-forward business opportunity.

Last year, China’s publicly traded large hog firms raced to produce at the rate unseen in peacetime. For 2021, the largest six hog farms announced ambitious production targets at 133 million hogs, 164% more than they did last year. Their business model is simple: selling gigantic amount of pork at a huge profit. The rest is execution.

Launched not quite two months ago, we have witnessed large movements in DCE Live Hog Futures. From the initial price limit down, to the month-long big run-up, this contract offers ample opportunities for active traders. With more hog firms entering the market as commercial hedgers, market liquidity will improve gradually but surely.

China’s Impact on US Pork Industry

Next month, I will joint force with StoneX Group on a Webinar: How China impacts the US pork industry. This includes the hog and feedstuff industries, CME livestock and CBOT oilseed futures and options, as well as publicly traded US hog firms. Formal announcement shall come out in two weeks.