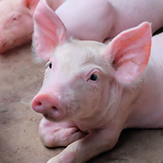 Post-farrowing and pre-weaning piglet scours can have large economic and production impacts in swine production. Piglets that have scours in the early post-farrowing period (1-10 days of age) have a greater probability of not surviving to weaning. When they do survive, they tend to be of lower weaning weight than those that do not experience a scour event early.1 These lower weaning weights carry through the nursery period and the lifetime of the animal, resulting in lower efficiency and growth. Ultimately, this leads to fewer pounds of production for the system overall and decreased efficiency.

Research at the Veterinary Diagnostic Labs looks at the causes of post-farrowing scours, implicating multiple organisms. Primary causes of viral infections include Rotavirus, Transmissible gastroenteritis, Porcine Epidemic Diarrhea virus and Porcine Reproductive and Respiratory Syndrome virus. Coccidia is the major parasitic infection, whereas bacterial sources primarily include Escherichia coli and Clostridium species (perfringens types A and C, and difficile). All these organisms have been implicated either individually or as part of a combination of piglet scours. Clostridium species are present in 60 percent of the cases of post-farrowing scours.2,3 While the pathogenicity of each organism varies, Clostridium have the potential to attack the intestinal injury caused by other organisms and further aggravate the disease.