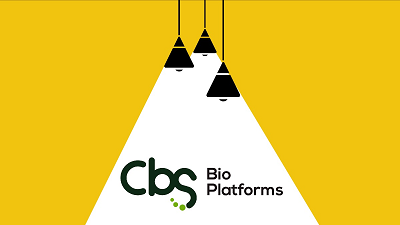 Fast-rising prospects, combined with a long winning streak of innovation and expanding global markets for its bio-based technology solutions, has culminated in a name change for Canadian Bio-Systems as the company launches a new identity as CBS Bio Platforms.

“It’s a very exciting time in the evolution for our company as we celebrate the legacy of what we have built over 37 years while transitioning to this new identity,” says Krisjan Jones, CBS Operations Director. “CBS Bio Platforms reflects our increasingly global focus combining both traditional and new markets for our bio-based platform technologies. It signals a new era for CBS working together alongside our growing network of partners and customers around the world.”

Canadian Bio-Systems was founded by Owen Jones in 1984 as a start-up. The company began with a focus on helping farmers enhance their feeding programs with more natural ingredients, primarily via enzyme technology, dealing in the development of novel enzyme supplements for animal feed that help farmers improve production while reducing environmental impacts.

CBS emerged as a pioneer in this field building into a world leader in enzyme technology while expanding its portfolio and applications of bio-based technologies.

“Throughout our history a consistent focus for CBS has been delivering solutions that make a real difference for farmers and other end users,” says Krisjan Jones. “The original vision and science-focused approach that Owen started remains the backbone of our company today, while our technologies and their applications continue to diversify.”

Today while pivoting to CBS Bio Platforms, the company leverages a strong foundation as an innovation focused organization that researches, develops and manufactures a wide range of bio-based products used in feed, food and industrial applications. It has 37 years in business, building status as a world leader in feed technology serving customers in more than 20 countries internationally.

The company is headquartered in Calgary, Alberta, Canada, with office, manufacturing, warehouse and partner locations east and west, including the recently launched CBS America distribution centre in Volga, South Dakota.

A critical foundation of the success of CBS is a core focus on science. Leading the next generation under CBS Bio Platforms are the newly revamped and expanded CBS Feed Science Platforms (FSPs): Bio-Catalyst technology, enhanced yeast technology, grain management technology, functional fatty acids, and phytogenics & probiotics. All are backed by science, processes and resources to help customers determine “What’s your FSP fingerprint?”

“In Canada, the U.S. and around the world we are seeing growing demand for bio-based solutions that not only represent major innovations but also fit marketplace expectations for optimized efficiency, productivity and sustainability,” says Rob Patterson, CBS Technical Director. “Many of the opportunities CBS has invested in with its research and development activity over nearly four decades are now becoming even more aligned with the trends of today and of the future. It’s an exciting period for everyone who has been a part of this journey including our team members, partners and customers.”

Since its inception, CBS has benefited from strong integrated relationships with major research programs. The company has also expanded its technology, marketing and distribution partnerships worldwide including in the U.S. Asia Pacific, Europe and in numerous additional emerging markets.

As markets and industries for CBS Bio Platforms grow in diversity, the company’s primary focus on agriculture is doing record business with a robust outlook for the long-term, says Mark Peters, CBS Sales and Marketing Director. “Looking ahead, the science-driven focus of CBS Bio Platforms has never been more important as farmers continue to champion innovation while adapting to new rules and marketplace expectations.”

This includes for example the heightened demands for livestock operations to become more efficient and productive while at the same time leading on sustainability advances such as antimicrobial stewardship and reduced environmental footprint.

“Feed technology remains on the rise as one of the top opportunities for livestock operations to make continued advancements,” says Peters. “The potential is tremendous and we are just getting started. With science leading the way there are many new pathways to progress that bode well for the future.”