Absent opposable thumbs to grip the wheel, weaner pigs can only sit back and soak up the view. Ensuring their comfort during the trip is a big part of animal welfare, transport regulations and the Code of Practice for the Care and Handling of Pigs, and was the impetus for the study “Effects of long distance transport on the health and welfare of early weaned pigs”.

At present, there is a dearth of scientific data on how weaned pigs fare during transport. Some studies have been run, but are of limited use as they only simulated the movement of pigs by driving them around in a research van.

In it for the long haul

“Our project is comparing the experience of weaner pigs in commercial trailers on long trips from Saskatchewan to Ontario versus shorter runs within Ontario,” said Dr. Jennifer Brown, research scientist –ethology at the Prairie Swine Centre in Saskatoon, SK.

Researchers followed four different loads for each distance and measured a number of elements for each animal: heart rate, temperature, blood samples and presence or absence of lesions, to name a few. They also loaded the pigs into two different trailer compartments to gauge the im-pact, prompted by a previous study on finisher pigs showing that placement in transport was more important than length of journey.

As part of the study, cameras were installed in trailers to conduct time lapse photography and capture pig behavior. What was their posture? Were they lying, sitting or standing? Were they pil-ing on top of each other or spread out in the compartment? Trailers were fitted with accelerome-ters to gauge vibration and help explain differences in pig stress response.

Once the animals reached the nursery, scientists videotaped them and performed follow up measurements three days later.

Though they only have limited data at this point, researchers are seeing that blood measure-ments, dehydration and muscle fatigue were all in normal ranges for weaner pigs in both the short and long term travel groups. Some weight was lost during long transport, but rapidly regained fol-lowing the trip.

From here, Dr. Brown plans to study another angle of pig transport, looking at the impact of differ-ent interventions in the trailer –such as water provision –and of the new hydraulic deck and cli-mate controlled designs now appearing in many units. She hopes to compare cold weather pig transport in traditional pot belly trailers against the hydraulic models, expecting that differences in winter could be substantial.

“If we find the hydraulic trailers are giving significant benefits to pigs in cold weather, it should en-courage those hauling weaner pigs for long distances to opt for this design in greater numbers,” said Dr. Brown.

All of this work comes at the perfect time for industry. The Canadian Food Inspection Agency (CFIA) is currently implementing changes to the Health of Animals Regulations (Part XII) on ani-mal transportation to ensure they better reflect the needs of animals and improve overall animal welfare in Canada. One item on the table is restricting the maximum transport duration for pigs from 36 hours to 28 hour and increasing mandatory rest stops from five to eight hours.

Fortunately for haulers and producers, the government is open to considering scientific data that might influence their thinking, which is where Dr. Brown’s project comes in.

“Weaner pigs differ from market hogs in the reasons for transporting them and the impact on their well being. Long rest stops may be suitable for beef cows going across the country, but offloading pigs during the trip raises serious biosecurity concerns and puts their health at risk.”

Federal regulators may consider amendments specific to weaner pig transport once more evidence on the impact of these practices is available.

It may sound like a lot of work to explore different aspects of pig health and how transport affects them, and there’s a good reason for that. This study was no small undertaking, described by Dr. Brown as “labour intensive”.

“Without the collaboration of industry enterprises and the research team at the University of Guelph, this work would not be possible. Our commercial partners clearly recognize the need for this information around pig transport, and we gratefully acknowledge their contribution.”

With all of the various factors at play around long haul weaner transport, some might ask the ob-vious question: Why do we do it at all?

“In western Canada, we have a number of sow herds in high health situations, and no PED in Saskatchewan. This makes our animals in great demand from places like Ontario and the U.S. Midwest. We ship many pigs to destinations that are near good feed supplies to lower feed costs, or places closer to slaughter facilities. Trailers these days can take up to 2500 pigs in a load, so you can fill a finisher barn in one trip.”

Making that trip a pleasant one is top of mind for industry, and, if they could, pigs would give it a thumbs-up as well. 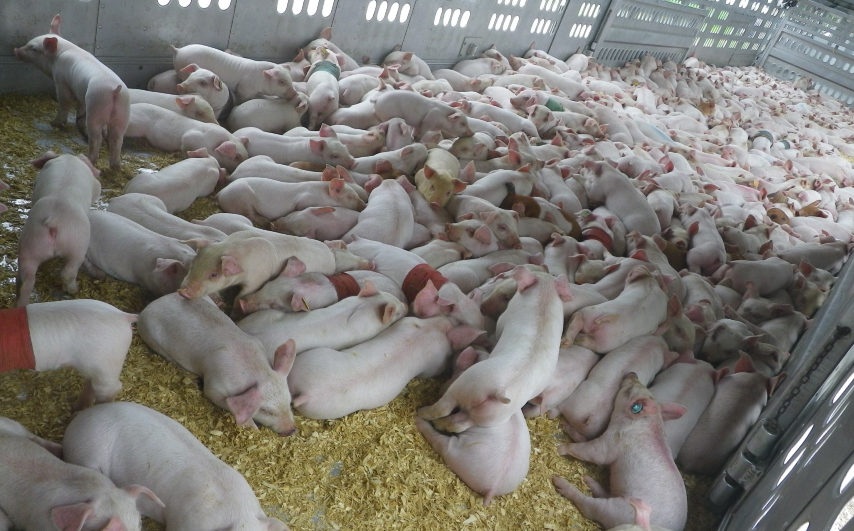 Why is it important in wean-to-market barns? By: Dr. Rachel Stika Jensen Pipestone Veterinary Services