Allowing the importation of pork with ractopamine residue is a trade matter, not a safety issue, an Executive Yuan official said yesterday, adding that no health problems have been reported since the ban was lifted.

The official, speaking on condition of anonymity, made the remarks ahead of the Dec. 18 referendum, which includes a question asking voters if they agree that the government should ban the importation of pork products containing ractopamine residue.

The Democratic Progressive Party (DPP) is urging the public to vote “no” on the referendum question, which was initiated by Chinese Nationalist Party (KMT) Legislator Lin Wei-chou (林為洲). 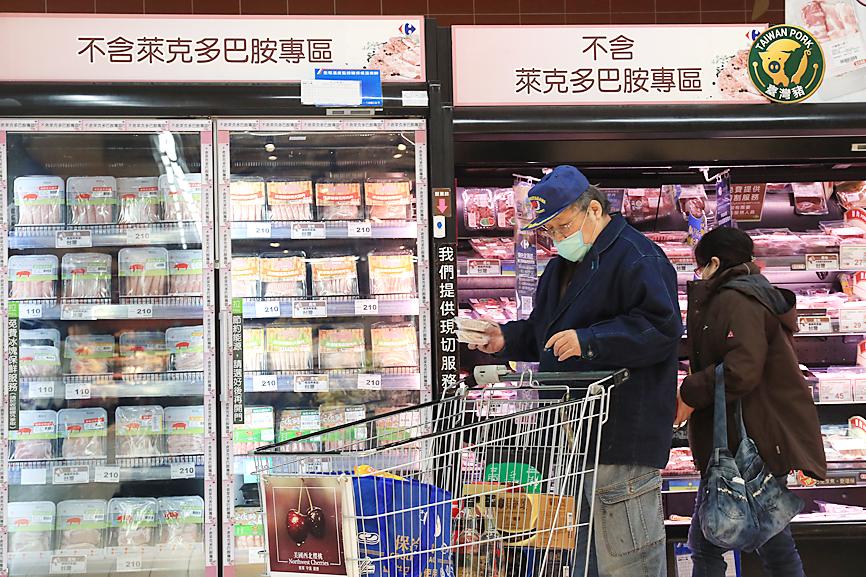 People pass a “ractopamine-free section” at a supermarket in Taipei on Jan. 1, the day that Taiwan lifted a ban on imports of US pork containing ractopamine.

The official said that 109 countries allow imports of pork and beef containing safe levels of ractopamine residue, including Japan and the 10 other members of the Comprehensive and Progressive Agreement for Trans-Pacific Partnership (CPTPP).

No health problems have been reported since Taiwan nine years ago allowed the importation of beef containing safe levels of ractopamine residue, the official said, adding that the issue is a trade matter in which Taiwan must reciprocate in bilateral trade with other countries.

If Taiwan does not follow international rules, based on science and safety standards, it could face problems joining the CPTPP and other regional trade organizations, the official said.

DPP Legislator Wang Ting-yu (王定宇) on Friday wrote on Facebook that a Taichung City Government Web site, which shows the results of ractopamine testing, listed only beef products as containing the substance, the importation of which began under former president Ma Ying-jeou (馬英九) of the KMT.

“Just in Taichung, tests found that 70 shops had beef products with ractopamine at levels within international safety standards. This proves that it is not a food safety issue. It is more important to open up for beef and pork imports with safe levels of ractopamine,” Wang wrote. “This way we can secure more favorable terms for our export economy, while helping Taiwan join the CPTPP and bolster Taiwan-US relations.”

On the other hand, KMT Legislator Chiang Wan-an (蔣萬安) yesterday launched a campaign in Taipei titled “Food Safety First,” in which he said that 60.9 percent of Taiwanese opposed importing “pork containing ractopamine” in a survey by Apollo Co.

Sixty-six percent of respondents said they would vote in the referendum, and 86.5 percent said that clear labeling for “pork containing ractopamine” is needed, he said.

“These numbers show the public’s concern for food safety. They have no faith in the government’s current measures. People are also angry at the ruling party for misleading them in painting opposition to ‘ractopamine pork’ as opposition to ‘US pork,’” he said.