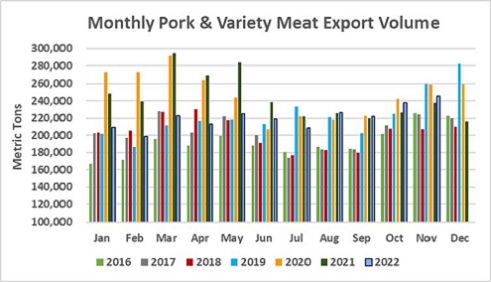 November exports of U.S. pork were the largest of 2022 in both volume and value, according to data released by USDA and compiled by the U.S. Meat Export Federation (USMEF). November beef exports were below the large year-ago totals, but 2022 export value already set a full-year record of nearly $11 billion.

Pork exports to Mexico set another value record in November, topping $200 million for the second consecutive month, and volume was record-large at 87,809 mt. Overall results were also bolstered by excellent growth in variety meat exports, which were up more than 25% year-over-year at just over 50,000 mt, valued at $116.9 million – up 21% and the fourth highest on record, driven by growth to China and Mexico.

“I cannot say enough about the tremendous performance of the Mexican market and its importance to the U.S. pork industry,” said USMEF President and CEO Dan Halstrom. “U.S. pork faces heightened competition in Mexico, especially with the recent suspension of import duties. But U.S. industry efforts to educate the trade and consumers about the outstanding quality, consistency and value of U.S. pork continue to pay dividends and elevate overall demand. The rebound in pork variety meat exports is also excellent news for the U.S. industry, reflecting broad-based demand growth and an improved labor situation.”

“Similar to the previous month, November results for U.S. beef exports reflected severe headwinds in our large Asian markets,” Halstrom said. “Key currencies in the region were still slumping, which impacted the buying power of importers and consumers. COVID cases and lockdowns in China were also intensifying, prompting widespread protests and the eventual lifting of many restrictions. But the U.S. dollar mainly peaked in late October and early November and global demand has remained relatively strong. Even with a high level of economic uncertainty, 2022 has been a fantastic year for U.S. beef exports and the outlook for the coming year remains positive.”

November pork exports to leading market Mexico increased slightly from a year ago in volume to a record 87,809 mt, while export value soared 38% to a record $210.1 million. For January through November, exports to Mexico totaled 869,526 mt, up 9% from a year ago and just short of the full-year record achieved in 2021. Export value reached $1.84 billion, up 20% year-over-year and already setting an annual record. U.S. pork’s remarkable performance in Mexico comes despite increased competition, with import duties from all eligible pork suppliers suspended since May. Mexico also recently opened for the first time to Brazilian pork, provided that it originates from approved plants in the state of Santa Catarina and goes directly into further processing.

Pork exports to the Dominican Republic had already set annual records through October, and demand further intensified in November. Shipments reached a record 10,229 mt in November, up 70% from a year ago and up notably from the previous high of 8,966 mt in April. November export value nearly doubled year-over-year to a record $30.1 million (up 97%). January-November exports to the DR totaled 76,085 mt, up 42% from a year ago, while value increased 48% to $204.8 million. Similar to Mexico, the DR temporarily suspended import duties on red meat and poultry in June, heightening competition in the market. But the decree suspending these duties recently expired, meaning the U.S. is once again the only major pork supplier with duty-free access. Imports from other major suppliers are subject to the DR’s most-favored-nation rate of 25%. Canadian pork exports to the DR fell back to zero in November after gaining some momentum when duties were suspended.

Following a slow start in 2022, pork exports to China/Hong Kong regained considerable momentum in the second half of the year. This trend continued in November, with exports climbing 39% from a year ago to 54,410 mt, valued at $140.3 million (up 40%). While driven in large part by strengthening demand for variety meat, pork muscle cut exports to the region also increased 37% to 20,699 mt, valued at $59.8 million (up 64%). For January through November, pork and pork variety meat exports to China/Hong Kong were 31% below the previous year’s pace at 486,213 mt, valued at $1.25 billion (down 24%).

Other January-November results for U.S. pork exports include: