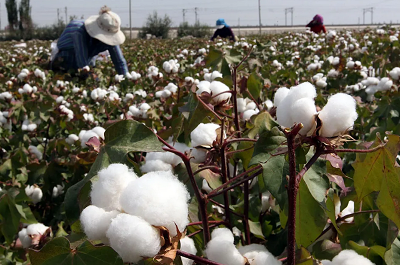 China should build more pig farms in Xinjiang as its cotton industry is under threat from declining soil fertility, according to a government researcher, commenting after some international companies avoided fiber produced in the region over allegations of forced labor.

Hog farming could become a pillar industry in the region and supply 10% of the nation’s output, up from 1% now, wrote Mei Xinyu, a think-tank researcher at the commerce ministry. Xinjiang already grows more than 80% of the country’s cotton, and some of those pig farms would replace fields sown to the fiber that have been degraded.

The suggestion comes after the U.S. banned imports of textile products containing cotton from Xinjiang in protest over alleged ill-treatment of its ethnic Uighur Muslim minority, and several western countries slapped sanctions on China over the same issue.

Cotton is the most profitable crop in the region, and rotation to other crops is not in the interests of growers and hard to achieve on a large scale, Mei said on the WeChat account of Beijing News, a government-run newspaper. The only feasible option is to build more hog farms, he said, and they can use local grain to feed the pigs or import supplies from neighboring countries.

Xinjiang Production and Construction Corps, a military-affiliated entity, and other groups have already started building several large-scale pig farms, which will increase output significantly in the next two years. In the meantime, animal waste from the farms could be used to boost soil fertility, which has been exhausted by extensive use of chemical fertilizer, said Mei.

“The most desirable way to solve this problem is to raise pigs and grow cotton simultaneously, and return a large amount of manure from pig farms to the fields after treatment to enhance soil fertility and increase profits,” Mei said.

China should expand hog farms in areas like Xinjiang and Heilongjiang, which are less population-intensive than the inland provinces like Sichuan, Hunan and Henan which dominate the country’s pork production, Mei said. Outbreaks of African swine fever that started in 2018 slashed hog herds by as much as half and sent meat imports spiraling to a record.