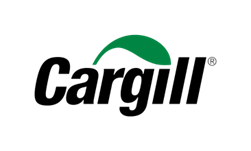 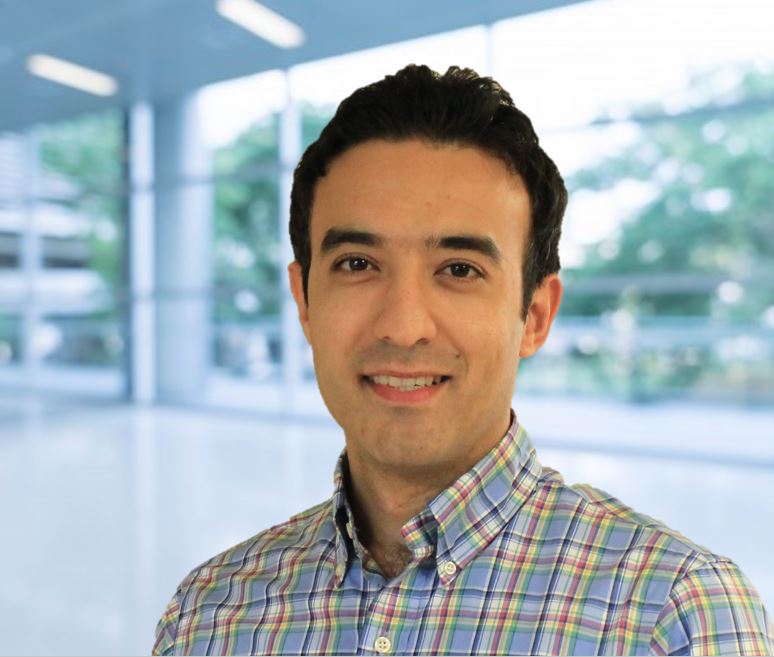 Piglet livability is described as the percentage of potential viable piglets a sow can raise. It is calculated by adding the number of stillborn and pre-wean mortality, divided by the total number of born piglets. The swine industry is constantly increasing litter size which often results in higher number of stillborn, lower birth weights and greater pre-wean mortalities, causing a significant reduction in piglet livability. In Canada, pre-weaning mortality of live-born piglets frequently is around 12%, with a further 7 to 8% of piglets being stillborn. The piglet livability of only 82%, even in well managed operations, imposes a substantial loss to producers. A two percent improvement in livability currently is worth about $19 more per sow, making management of the sows and piglets to increase piglet livability an important goal for producers.

Many factors contribute to livability of piglets including genetic, housing, nutrition, and management. Different attempts have been made to increase piglet livability by focusing on sow nutrition during gestation and lactation. A group of researchers from Aarhus University in Denmark reviewed the impact of sow nutrition in late pregnancy and indicated that good nutrition in this period has profound effect on piglet livability by improving colostrum quantity and quality, and increasing milk production and glycogen depots in the piglets (Theil et al, 2014). Glycogen is the only available energy source for piglets until colostrum is ingested. Many piglets die one or two days after birth because of insufficient body energy reserves. Therefore, increasing energy deposition in piglets during gestation will improve their survival after birth, particularly if milk consumption from the sow is limited. There is also strong evidence of the effect of lactation diet and sow feed intake on piglet livability.

A well-balanced lactation diet can increase sow colostrum and milk production. Craig at the Agri-Food and Bioscience Institute in Northern Ireland demonstrated that sows are able to achieve weaning weights of 110 kg per litter in a 28-day lactation, if given the correct balance of energy and amino acids (Craig et al., 2016). Amino acids concentrations in sow lactation diets play a key role in milk quality and composition. An increase in sow colostrum and milk yield is positively correlated with increased piglet livability and growth during the first days of life (Vadmand et al. 2015). Research with lactating sows has indicated that increasing lysine level during lactation increases the number of weaned piglets and piglet weights at 21 days weaning (Tu et al., 2010). More recently, the importance of other amino acids such as tryptophan and valine has been highlighted in lactation diets. A group of researchers at the University of Minnesota reported that piglet mortality decreased with increasing dietary Tryptophan in lactation diet (Fan et al., 2016). They showed a significant reduction in piglet mortality with a Tryptophan to Lysine ratio of 0.2. It is worth to mention, that feed intake of the sow needs to be considered carefully for the optimum level of amino acids in diet. The lower the feed intake, the higher the amino acids inclusion needs to be.

Cargill studies also found significant improvements in piglet livability after feeding elevated levels of certain polyphenols. These compounds are a source of natural antioxidants for gestating and lactating sows and are extracted from certain fruits and vegetables. Grape, berries, garlic or onion are just few examples of foods with high amounts of polyphenol antioxidants. Antioxidants protect the body from the damage caused by free radicals and keep cells healthy. Free radicals are active chemicals that are naturally formed in the body during normal cellular metabolism. However, in animals under stress (e.g. poor environment, exposure to pathogens/toxins), the production of free radicals goes beyond the ability of the body to neutralize them. High levels of free radicals cause oxidative stress and damages major cell functions, reducing production performance. Research has indicated that antioxidants such as vitamin C and vitamin E are in limited supply in sows during late gestation and early lactation (Fig. 1). 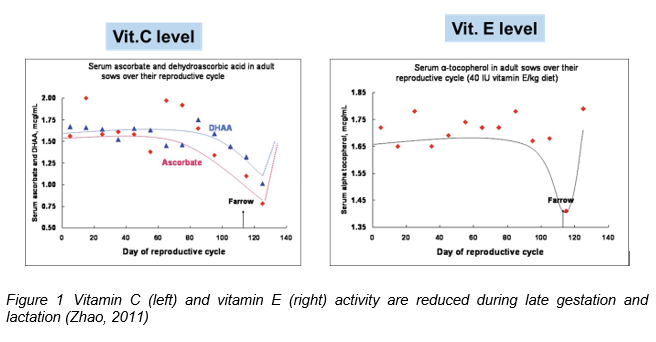 Increased oxidative stress has been shown to be one of the major contributing factor for reduced reproductive performance in sows (Zhao, 2011). Adding polyphenols instead of higher levels of dietary vitamin E is preferable because of a synergistic antioxidant mechanism between vitamin E and polyphenols (Fig. 2). Vitamin E reacts with free radicals and is inactivated in the process. Polyphenols regenerate vitamin E and also scavenge free radicals themselves. Therefore, administering antioxidants such as polyphenols in addition to vitamin E has important advantages. Polyphenols have recently been shown to also directly benefit piglets as an effective antibiotic alternative by improving intestinal oxidative stress and improving the balance of gut microbes (Han et al. 2016).

Figure 2 Polyphenols, in addition to its free radical scavenging function, regenerate or spare lipophilic antioxidants, such as vitamin E

Last but not least, piglet livability can be increased by a range of management solutions. Sow management factors may include good farrowing room hygiene, minimizing stress around farrowing, or monitoring sow behavior to reduce the crushing risk. For piglet management, providing a heated nest area, split suckling or fostering soon after birth if it is necessary or providing supplementary creep feed rank high on importance (Kirkden 2013). Piglet livability is of value not only for economic reasons but also because of animal welfare and ethical aspects. The application of the newest knowledge in sow nutrition has shown to be an effective tool in improving piglet vitality.