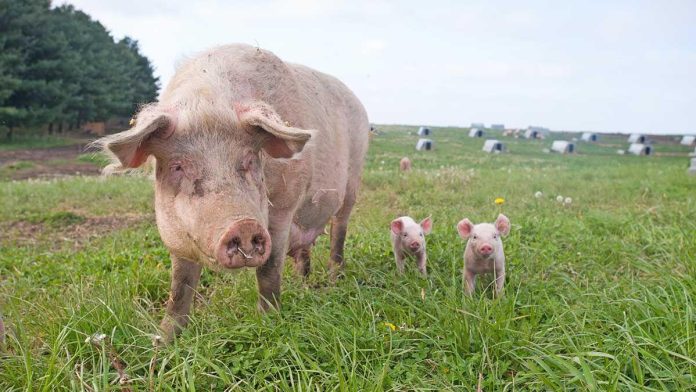 HOLSTERBRO, Denmark — Jude Becker and Bertel Hestbjerg are friends who visit each other’s farms as often as they can, sharing ideas about pig farming. The two live on different continents 4,200 miles apart.

Becker, who farms near Dyersville in eastern Iowa, and Hestbjerg, who farms in Holsterbro in western Denmark, have been sharing ideas in person and online for nearly 20 years.

Their friendship started in 2003 when Becker was part of a group of U.S. farmers, university researchers and meat scientists traveling to northern Europe to study the production of niche pork there. They stopped at Hestbjerg’s farm and witnessed his piglets raised outdoors with farrowing huts in fields with poplar trees.

“I was a young man, kind of awestruck,” Becker recalls.

At age 26, he was an “aspiring pork producer” who admired the “clear-headed approach” the Danish farmer had towards raising pigs.

The Danes keep excellent records and are systems-based, Becker said.

“I always try to model my farm after that,” said the sixth-generation Dubuque County, Iowa, farmer. “Our family was never fond of the industrial agriculture model.”

Becker developed Becker Lane Organic Farm, finding a processor and a market for his Certified Organic pork. First he visited Chicago and Minneapolis to find markets for his specialized pork. Today his biggest markets are in California, and he exports to Japan and Hong Kong.

In order to be Certified Organic, he must use organic feeds, humane housing, no antibiotics, no slatted floors, let pigs keep their tails, and follow other specific production and animal well-being requirements.

“We are trying to mimic conditions pigs would have in nature,” he said.

To add to their outdoor comfort in Iowa, sows have insulated huts and piglets have access to the outdoors from the time they are born.

Becker grows his own organic grain, and imports some of his specialized equipment, including sow rings from England.

The visits and idea exchange between the two farmers continue, and Hestbjerg was last in Iowa in 2019 when he was a keynote speaker at an organic event and visited Becker’s farm. Becker was most recently at his counterpart’s farm in February of this year.

Their relationship has never been a one-way exchange of information. Becker also influenced the Danish couple to re-think how they market their pigs.

As is standard with pork producers in Denmark, the farm initially sold to Danish Crown, a cooperative owned by 5,620 farmers with 1,500 of the farmers raising pigs and the remainder beef and dairy.

However, Hestbjerg wanted to do some of their own marketing, which tells the story of how their pigs were raised. Becker’s branding inspired him.

Since the pigs are raised outdoors amid poplar trees, Hestbjerg developed their Poplar Pigs (Popplegris) brand. They asked Danish Crown, one of the largest meat processors in Europe, for permission to do their own branding and marketing for a portion of their pigs. The company said it was all or nothing.

After a few more tries, the family decided it was nothing and went with their own branding, marketing and processing system.

“I thought, ‘that’s a big risk,’” Becker said of learning about Hestbjerg’s choice.

It turned out to be a risk worth taking.

In 2017 they went solo with the Popplegris brand. The brand guarantees going well beyond approved animal welfare and ecological requirements in Denmark. It tells their story of raising pigs in farrowing paddocks featuring insulated huts for comfort during all seasons in Denmark. They sell their brand to supermarkets and to a Danish company selling to butchers and restaurants.

Hestbjerg said he originally didn’t want to be a farmer. He saw how hard his parents worked for little money and there was seldom a holiday. But when he found his niche in organic pork, he knew it was the career he wanted for his family.

Pork producers in Denmark tend to produce pork as cheaply as possible for the export market, not the route he wanted, he said. Danish pork producers have pushed the average litter size to new heights, but mortality rates have also climbed. Consumers, animal welfare advocates and a June 25 editorial in a Danish farm publication, Landsbrugs Avisen, called for farmers and companies to reduce litter sizes for better animal health.

With such concerns in mind, Hestbjerg, who operates the largest outdoor pig farm in Europe, said he aims for 16 pigs per litter because a pig has 16 teats.

In Denmark, they call this style of outdoor pig rearing, fri (free) pigs. In England, it may be referred to as pasture pigs, “en plein air” (in the open air) in France, and “outdoor pigs” in the Midwest, Becker said. The concept is the same — to offer good living conditions for the pigs and provide quality meat, he said.