New research points to the possibility that organic pig production may benefit from using parent animals that give birth to fewer but larger pigs than those currently being offered by the Danish firm DanAvl, whose lines have been tailored to intensive indoor production. A study under organic production conditions showed that dams from Topigs Norsvin’s TN70 line were able to wean the same number of piglets as DanAvl’s LY sows, only with a higher weight at weaning. Furthermore, as the TN70 sows’ number of teats matched the litter size, the sows could take better care of their own piglets until weaned.

One of the challenges of organic pig production is sows giving birth to more piglets than they can look after themselves. In addition, big litters result in smaller weight at birth for each individual pig, which is a contributory factor in the death of many piglets. If the surplus pigs from the fertile sows are to survive, the organic breeders must either make use of nursing sows to rear surplus piglets or cull the piglets for which there are no teats.

“The problem is primarily due to organic production using sows that have been bred for intensive conventional production, which takes place indoors, rather than for organic production, which takes place chiefly outdoors. In conventional production, a number of management tools are available to help the many small, weak and surplus piglets that the sows cannot rear themselves. This option does not exist in a freerange setting, where the sows farrow in huts in open fields. It is therefore worth considering a switch to a slightly less fecund type of dam better suited to an organic form of pig production,” says Lene Juul Pedersen, senior researcher at the Department of Animal Science at Aarhus University in Denmark.

To find an alternative to the highly fertile LY sows from DanAvl, some organic herd owners have experimented using semen from Topigs Norsvin boars for Danish LY sows with good results. Therefore, under the auspices of the projects VIPiglets and ‘Consolidated decision-making basis and animal welfare in organic pig farming’, the researchers from Aarhus University have compared characteristics in parents and offspring from Topigs Norsvin’s TN70 line with LY parent animals from DanAvl under organic production conditions. All dams were inseminated with named semen from DanAvl’s Duroc boars.

Stronger pigs  From farrowing to weaning, the differences were obvious. DanAvl sows had significantly more piglets born in total but not enough teats for all piglets. Therefore, unless nursing sows were used, it was necessary to cull an average of one piglet per litter from DanAvl sows, while it was only necessary to cull piglets from TN70 sows in odd instances. That resulted in a lower proportion of piglets from the TN70 line being culled. The number of weaned piglets did not differ between the two types of parent animal (cf. table). The piglets from DanAvl weighed less at birth and were therefore more vulnerable to hyperthermia. This was reflected in a lower body temperature 24 hours after birth. Hyperthermia is a major risk factor, which can result in the piglets starving to death, dying of disease or being killed by squashing.

”The number of weanlings in our study is an expression of how many piglets the sows could take care of themselves without the aid of nursing sows. The use of nursing sows is very difficult and time-consuming in outdoor herds. If the surplus piglets from DanAvl’s sows are to have any chance of surviving, nursing sows will need to be used, otherwise the piglets will have to be culled soon after farrowing, for ethical reasons,” Lene Juul Pedersen explains.

Multiple advantages  An additional advantage of the TN70 sows is that the piglets had higher weight gain until weaning. On average they weighed 1.2 kg more per piglet than piglets from DanAvl’s sows. Higher weight at weaning makes the pigs more resilient and, all things being equal, a high weaning weight is important for subsequent growth. The study also examined weight gain till slaughtering and the meat percentage in pigs from TN70
sows. The provisional results do not indicate better daily gain in the offspring of TN70 after weaning, while the meat percentage from the first three slaughter batches was 60.5% in offspring from TN 70 and 58.3% in offspring from DanAvl. The pigs were slaughtered at an average weight of 101 kg, which, all things being equal, will yield a higher meat percentage than if the slaughter weight were higher.

All in all, for organic breeders there are several positive aspects of switching to a parent animal that gives birth to fewer and more resilient pigs. One plus is better daily gain till weaning and possibly also a higher meat percentage in the TN70 offspring when slaughtered. In addition, the same number of weanlings can be achieved using substantially fewer resources, which is a crucial factor in the ability of organic production to improve its sales and maintain its reputation in terms of delivering good animal welfare and resourceconscious production, Lene Juul Pedersen concludes.
The results of the projects will be presented at the 2017 ”Ecology Congress” in Kolding on Wednesday, November 29.

Facts about the projects behind the study
• The project VIPiglet is part of the Organic RDD 2 programme coordinated by ICROFS (International Centre for Research in Organic Food Systems). It has been subsidized by the Green Development and Demonstration Programme (GUDP) under the Danish Ministry of Environment and Food. • The project ”Consolidated decision-making basis and animal welfare in organic pig farming” is supported by the Organic Farming Fund.  • Taking part in the project are Aarhus University, the Development Centre for Free-range Livestock, SEGES Økologi Innovation and organic pig breeders. • Select results from the study can be seen in Table 1. 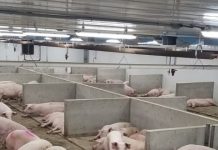