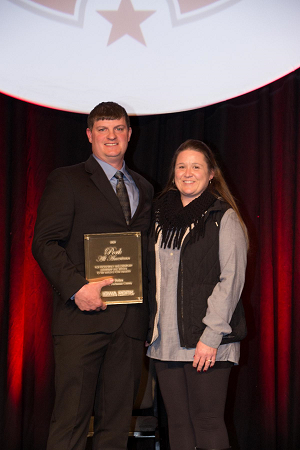 Third generation farmer, Mark Nolan of Masonville, has been named the 2020 recipient of the Pork All-American Award from the Iowa Pork Producers Association (IPPA). The Buchanan County farmer was presented the award at the 2021 Iowa Pork Congress banquet in Des Moines.

The IPPA Pork All-American award was established in 1970 to honor producers younger than 40 years of age who have established themselves as community leaders and successful and dedicated business people. They have also previously been presented with the Master Pork Producer designation; Dolan won that award in 2017.

After graduating from Iowa State University, Nolan spent two years working away from the family farm and returned in 2005 to operate the finisher portion of the family’s pig business. Dolan has wean to finish pigs that he manages every day. “I enjoy watching the little pigs come in and watching them grow,” Dolan said.

He said he feels lucky to be back living and working on the farm where he grew up. The pork industry “offers opportunities for anyone who isn’t afraid to work hard.”

In addition to the pig operation, Dolan also grows corn and soybeans, and incorporates a variety of environmental practices on his fields, including cover crops, strip-till and no-till. He also uses manure from his pig operation to fertilize his corn fields – the main source of feed for his pig operation.

Dolan also appreciates that the farm business is one where his wife Beth, and daughters Isabelle and Kate, can work together as a family.

He is also a member of the Buchanan County Pork Producers and has served on the group’s board and the IPPA district nominating committee.

The Iowa Pork Producers Association and Iowa State University Extension co-sponsor the Master Pork program awards, including the All-American award. Nominations for the 2021 Master Pork Program awards will open in May.