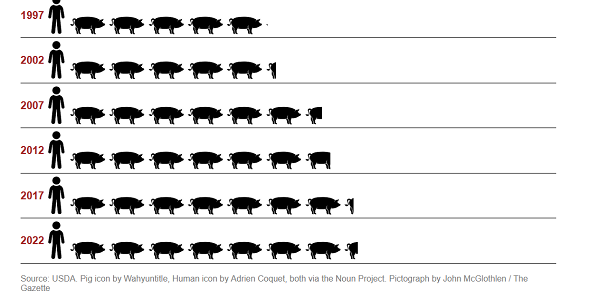 Iowa continues to lead the nation in hog production

Iowa continues to be the top producer of hogs in the United States by a landslide, outnumbering people by over seven to one.

There are 23.6 million hogs in Iowa, compared with the state’s 3.2 million people. Although this is a decrease in hogs of 1.3 percent in the last year, Iowa still is the top producer of swine in the country, according to a new Quarterly Hogs and Pigs report by the U.S. Department of Agriculture’s National Agricultural Statistics Service.

The second largest producer is Minnesota with about 8.6 million hogs, followed by North Carolina with 8.20 million, according to the report.

To obtain an accurate measurement of the U.S. swine industry, the National Agricultural Statistics Service surveyed roughly 6,300 operators across the nation during the first half of December. The data collected were received by electronic data recording, mail, telephone and through face-to-face interviews.

There are about 66,000 pork producer facilities in the United States, according to the National Pork Producers Council. More than 610,000 jobs are supported by the pork industry and $57 billion in gross domestic product added to the U.S. economy.

Here are five other facts about hogs: