Infrared sensing works by utilizing small transmitters to project invisible light beams to receivers located on the opposite side of the body.   As feed accumulates in the control body, the beams are interrupted, and the control shuts off the motor operating the feed line.  As the feed is consumed and falls down the end tube, the infrared beams make the connection again, switching on the motor.

Infrared detection has several advantages compared to other types of sensing devices.  First, there are no moving parts to wear out or replace. Second, infrared beams are not affected by excess moisture and feed buildup on the control’s interior.  To demonstrate, we sprayed water on the interior of the control, allowing feed dust to cake on the walls.  Even in this extreme condition, the controller continued to operate without failure.

Hog Slat’s newest feed line control, the HS820, uses infrared technology along with a color-coded display to quickly inform the user of its operational mode. 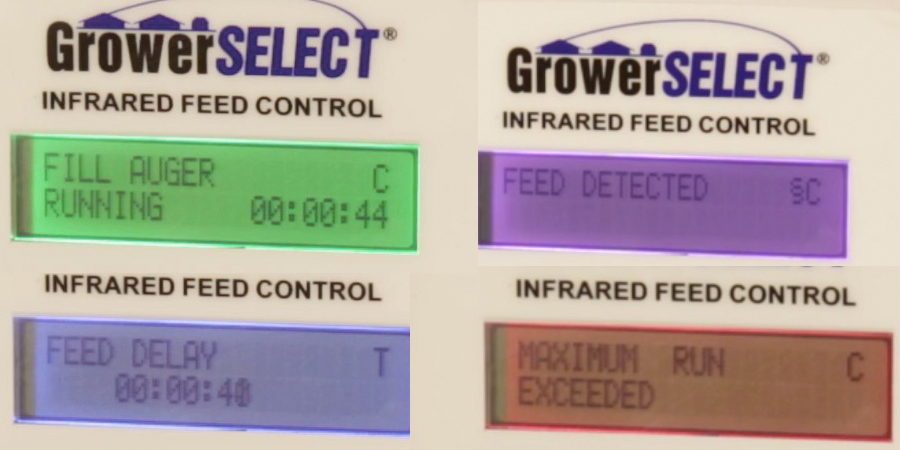 The basic operation of the HS820 is easy to follow.  When the system is running, the display is green.  When feed builds up in the drop tube, the screen turns purple indicating feed has been detected.  As the feed drops away, activating the control, it goes into delay mode to prevent the feed motor from short cycling, and the display turns blue.  After the delay, the controller turns the feed motor on to fill the system, with the screen returning to green.  Should the system run longer than the preset maximum run time, the controller shuts down the system, and the display turns red.  The red display alerts the user that there is a problem with the feed delivery; empty bin, broken drop tube, etc.   The system will not run again until the user manually resets the control.  The control also comes with an alarm contact that connects to an alarm system or house controller.

The color-coded display permits the user to see what mode the system is in from a greater distance.  For instance, the herdsmen easily see a red error message on the screen from the alleyway without entering the pen.

The HS820 also includes a built-in, 24-hour time clock.  This feature allows a user to set a window of time the system can run.  For example, by setting the on time to 6 am and off time to 10 pm, the system is only operational during the day and shuts off at night.  Most competitive models require wiring an external timer to the system to add this feature.

Retrofitting the HS820 to existing feed systems with mechanical or proximity switches is straightforward.   The unit is self-contained with a relay contact that connects directly to the feed system control box. 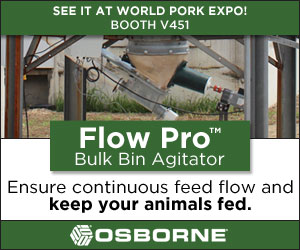